J and I sat on a rocky outcrop in the sun waiting for the others to appear through the dry eucalypt scrub below. We couldn’t hear them yet. In fact, we couldn’t hear much at all. It was one of those still, silent days in the bush when even the insects seem to be sleeping. The sun was warm, but we knew if we took off our jackets we’d begin to freeze. There had been a snowstorm the previous day; we were only warm because we’d climbed. This outcrop was a great place to stop. We’d gained our height and the land was about to flatten out and moisten up. Dry sclerophyll forest would give way to scrubbier melaleucas very soon. Rock underfoot would cede to mud. We would lunch by a stream in that section. Both times I’ve been there we’ve lunched at that creek (in fact, both times I’ve sat in the middle of the creek to eat – seemed like the easiest and most picturesque way of getting water “on tap” so to speak). As we sat and gazed, on the other side of the broad drop below, we could see dark storm clouds. I willed them away. “Let us have lunch first”, I pleaded. 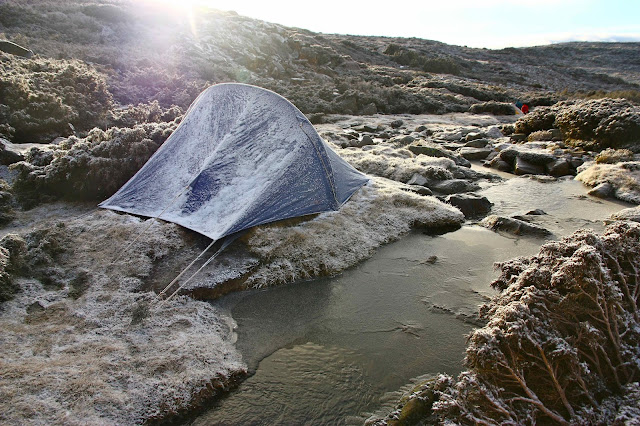 The morning had been beautiful – a case where the means are nearly as good as the end they enable. Over the Meander River to continue along the Smoko track for fifteen minutes to a clearing and track junction where the old road then becomes a tagged trail through pristine rainforest, heading (in our case) for Chasm Falls. There are several beautiful waterfalls here (complete with clear, beckoning pools offering fabulous swimming to the hardy in summer). These were followed by a brief upward slope to the rocks where we sat perched. Later, while eating at a higher creek, we could look up to see where our pad would continue. In particular, the chimney of snow that led to the bluff itself looked exciting. Before that, we would need to negotiate the swampy scrub, with its tapes (old, faded) or tin cans on a post (heavily rusted), and up past rocky scree to the chimney that led to the bluff. The snow in the chimney was slippery, steep and unreliable, so we elected to climb the rocks at the side until we reached the flat summit. The Ironstone cairn could be seen across the expanse at the top. The views from the bluff itself were well worth seeing (as views tend to be). At about this time the snow started as we headed off across the flat, rocky top, rich with tiny tarns, to a shallow gully that would offer protection should the wind come up during the night. I am not of a practical nature, and put views ahead of little matters like not being blown away, so had been rather hoping for one of the exposed tarns near the bluff itself, which would have offered the best sunrise and sunset photos. Be that as it may, the spot where we pitched was spectacular – next to a wall of iced snow that looked like a scene from Antarctica. Snow fell both as we pitched, and also while we boiled the trangia on our “kitchen rock” for a cup of soup to warm up. By the time we were drinking, B’s pack was already buried in snow. (He decided it would not fit in the vestibule. I hoped we could find it in the morning). Snow fell on us, mantling our heads in its light fluff as mugs obscured our faces. I decided it was a good idea to eat our main meal super early, as maybe the kitchen wouldn’t exist if we waited for real dinner time, and the others agreed. Some were so cold they didn’t finish dinner anyway and retreated to bed. B and I and some others went exploring the snowy fields until the light faded. It was beautiful in its white expanse, with some blue crevices for colour. We had pitched right next to the creek, and I lay listening to the soothing sound of its trickle as I dozed off – a sound that diminished as the night wore on and the creek increasingly froze over. By morning, it was a strip of ice with interesting patterns and a glisten as the struggling sun caught its crystals. The view from the Bluff was superb on the return journey. There was sparkling rime covering the boulders in the foreground, and the colours of the mountains seen through gaps in the boulders were more intense in the early light. The contrast of white ice and blue-green mountains on the horizon made it more special. It was sad to descend from our snowy kingdom, but at least we were heading down to superb rainforest and waterfalls.
This trip was done before I owned a gps. If you turn to my blog on Mt Ironstone ( http://www.natureloverswalks.com/mt-ironstone/ ‎) you will find the start of this route, which coincides with the Ironstone one until this route hives off, along the Dell Track, after Chasm Falls.