Have you ever done a friend a favour, and had the benefits of doing so far outweigh any effort you made? Not for the first time in my life, this was my experience on our Mt Ossa trip this week. Elin, a visiting orienteering friend from Sweden, wanted to climb Mt Ossa – because it’s famous; because it’s the highest mountain in Tasmania. She had her heart set on it. I have climbed it three times already, so felt no need to do so again, and had never been enamoured of the views from the top (having mostly seen the white-out ones). The forecast was good, and if I had had my way, then the SW would have been my choice of venue. But I said we’d go up Ossa for her sake, with the proviso that we slept the night up there, and that we got up in a single day from home, as we had airport appointments looming. Elin readily agreed. The packs were heavy with three days’ winter gear, just in case it was cold up there. My boots were unfortunately still wet from the Walled Mountain trip (only one day separates these two trips). My socks were wet before the first official step, and stayed wet until the end. With happy stomachs full of pineapple-and-walnut cake, we launched into the wonderful rainforest of the “Pillinger trail”, eventually arriving at a wonderful open plains section, replete with tarns, a mighty view of Pillinger and a clear stream for our first break after nearly an hour. Already, we needed my homemade muesli bars. The second stop we had was well before the next hour was up, but we had now joined the Arm River track, and had reached its high point, with a vista opening up that revealed not only Mt Pillinger and the mountains of the Cathedral-Twin Spires collection, but also Falling Mountain, Mt Massif, Mt Ossa and more. It was wonderful, and required gazing at while we drank some more from the tarn before beginning our descent. Lunch was had in the river (yes, in. Elin had decided that leeches were not her favourite Tasmanian thing. We were running away from them by eating on the riverbed pebbles) just before we reached Pelion Hut. 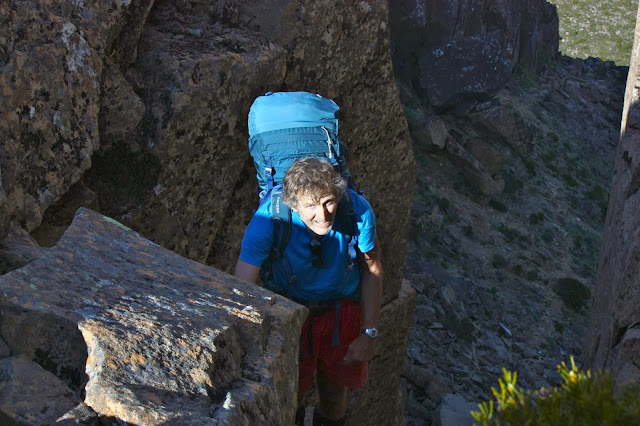 The day was very warm indeed, the packs heavy, and the walk up to Pelion Gap even warmer. However, the wildflowers were so beautiful they filled the journey with joy (almost). The snowflake petals of bauera overlapped the trail, making it a tiny ribbon of root-striated brown through a snowstorm of dotted white, with the buttercup yellow of pultanea daphnoides and the red of occasional waratahs giving colour contrast. And then you re-enter a patch of cool, mossy rainforest for a different experience of pleasure. Unfortunately I had once run this in 34 minutes, and walked it as part of the Overland trail in bygone days in 43 mins, so had never thought of this stretch as anything other than a quick dash. The slow trudge of 2013 seemed to last forever due to these false expectations, and  the 1 hr 11 it took lasted in my mind a lot longer than that. We were hot and bothered. The gap was beautiful, although I was bitterly disappointed that the scoparia bushes were not quite in bloom. I wanted to come back in a week. The mountain views made up for it. After another food break, and a chance for my husband to gather a bit more energy, we were off. Miraculously, as we climbed higher, the scoparia gained in colour. Meanwhile, more mountains came into view. I was floating on a cloud of joy. I was also in paparazzi mode by now. I left the other two to go on ahead while I played at photographing. It was nice to drop back and have the mountain to myself. At one stage I was walking along in a happy dream, looking at the light, the colours and shapes and singing away, and I was awoken from this traumverloren state by three chirpy voices saying hello – three former sudents here in the mountains, descending. How lovely to see so many young people out in the bush. With unis on holidays, there are lots of people with free time, but it is fantastic to see that it is used to get out into the wilderness. Bushwalking is NOT a dying sport, and if you think it is, just get out there in December. The hills are alive with the sounds of students … and young families for that matter. We met a five-year old peak bagger on the way out (already collecting points) who wants the Abels book for Christmas! I had caught Bruce again before the serious climbing began, which is good, as I wanted to help him through it. Life is tricky if you have Parkinson’s disease and a wife who loves to sleep on mountains. Some of the manoeuvres near the top of the very steep section were challenging for me with a heavy pack, let alone him. We got there. We’d cope with the problems of descent tomorrow. Elin was waiting at the top of the steep part, and we all did the final short climb to where the view opens up together. WOW. A hundred times WOW. I was totally filled with emotion at the sight of the view that greeted us once we emerged on the plateau at the top. I couldn’t believe that it had all come together and that my dream of sleeping on top of Mt Ossa with a view like this was really going to materialise. Tears came to my eyes as I gazed out at infinty – a limitless vastness of space and shapely peaks, all different shades of blue in the late afternoon light. It had taken us 6 hours and 2 mins of walking to get here. (I had had no idea how long we might need, given my husband’s condition, or even if we really would make it. I never envisaged that the elusive view could be so marvellous.) The remainder of the day was filled with peak staring, photographing, summitting, more peak staring and eating. Sunset and moonrise, it goes without saying, were a joy. We didn’t want to go to bed. We certainly didn’t want to waste such beauty sleeping. Elin resolved to stay up all night, just taking it all in. I settled for a slightly more conservative compromise of going to ‘bed’, but leaving all tent flaps open so that the view was not impeded and so I could lie in bed and gaze at beauty all night. The wind picked up after we’d turned in, so it was rather a noisy night, but who cares! We all got up at 4.45 to see pre-dawn and sunrise itself, the other two perched on the leeward side of a rock; me right out in the open for the best photo opportunities. More WOW. We all felt so very complete and happy as we tried to pack up the tents without having them blow off the moutain as we folded them, and reluctantly began our descent. We passed all three packs down at one point so as to climb unhindered by weight. The rest was no problem. The rest of the journey we floated on a cloud of happy reverie, replaying in our minds the splendour of the time on top. I had ostensibly done Elin a favour, but it had bounced back as one of the most marvellous gifts I have ever had. We also dashed up Pelion East (literally, as it was packless and thus very fast) en route home, but that will be a separate entry in the blog. All up, with two three-day trips in a week, we put in twenty-five and a half hours’ walking to which must be added lunch stops, choky stops, photography and more. My legs didn’t feel too flash trying to run today :-).