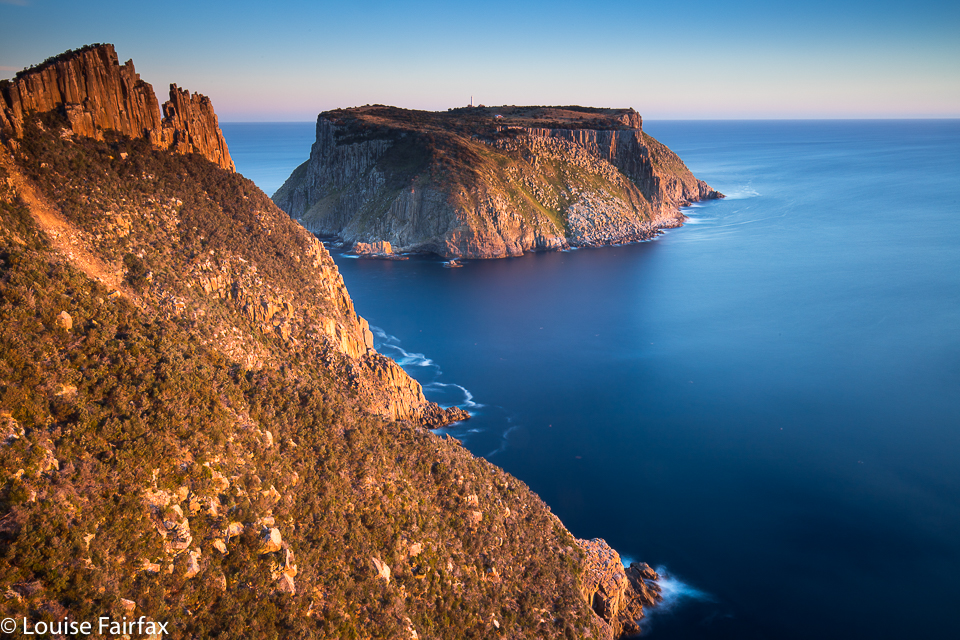 For as long as I can remember (but at least since 2011), I have wanted to sleep at Cape Pillar, to photograph sunset and sunrise there, and to climb The Blade, whose very name reeks of drama and consequence. At last, on the weekend just gone by, I had my chance. Tessa could be minded for a day and a half in Hobart. The weather looked reasonable. I could go.

I drove down, delighting in the countryside of that part of our state, bought myself a salad roll in Dunally, and was soon enough in the carpark poking stuff haphazardly into my pack. This was a last minute outing, and I had no idea how many things I had forgotten. Surely, whatever they were (as long as the list did not include anything to do with photography), I could live without it for twenty eight hours.

I met two guys in the carpark before I’d begun packing, but passed them after an hour, and from then on had no one I knew of ahead of me. After exactly two hours’ walking, I had reached the Munro Hut, and stopped there for a hearty drink and some food. My pace had been good to this point, but I was now about to fill up my bottles with water to fund the next few meals. From here on, I was a slow old cart horse, lugging not only overnight equipment and masses of weighty photographic gear, but also heavy water. I couldn’t believe the difference a few extra kilos made to my pace. Suddenly everything hurt. I took a lot more breaks, albeit it tiny ones, just to rest my shoulders and back for a minute or two before the next stint. I think it was 1 hr 36 mins’ walking from the hut before I reached the base of The Blade. Hoorah. Here I could dump my pack in the shade before exploring further, light and free. I climbed the Blade and Cape Pillar, enjoying the views and pondering where to take my later shots. I climbed the Blade two more times for the heck of it (and to check on details of angle, sun, what I was game to climb, etc). I then climbed it again at sunset, and again in the middle the night by moonlight. (And yes, again at dawn. I am now well acquainted with The Blade.) My gps said I covered 22 km equivalents that day.

I had arrived shortly after 2 pm, so that gave me time, not only for the above exploration, but also for a well-earned lie down, back in the shade in my trusty tent, hidden by bushes and listening to birds and feeling the space around me. That was a lovely time. Sunset was quite busy, as I used three different locations, separated from each other by ten minutes’ walking, trying to catch rays on rocks before they hid behind the mountain’s shadow.

After an excellent sleep (punctuated, however, by my rude alarm waking me at 1 a.m. to climb and do a spot of astro photography), I woke to the alarm again, in the dark again, to get into position for sunrise. Both sunset and sunrise (and 1 a.m. astro) were compromised somewhat by clouds on the horizon, stealing some colour at the important angles, but I still had a lovely time perched up there on my pinhead, listening to the barks and squeals of seals several hundred metres below.

I arrived back at the car at midday, but … oh no. I had a flat tyre, and my key was missing. That took two hours to solve – a solution achieved by the help of several fabulous Good Samaritans, notably (but not only) Henry and Cynthia. People helped lift and push things I am not strong enough to lift or push, and others offered or joined in. Others still minded my gear while I went to the Rangers’ Office. I was absolutely starving by the time I got out of there after that delay, but luckily there is nice food at a Lavender Farm not far from the main road, so that made me feel heaps better. I didn’t make it back to Launceston that night, as I could only go at 80 kph, and had lost two hours. I bunked down in Hobart instead. I’d had enough, and had had insufficient sleep with all that odd-hour photography. Two capes down; one to go. I’m enjoying Cape bagging.