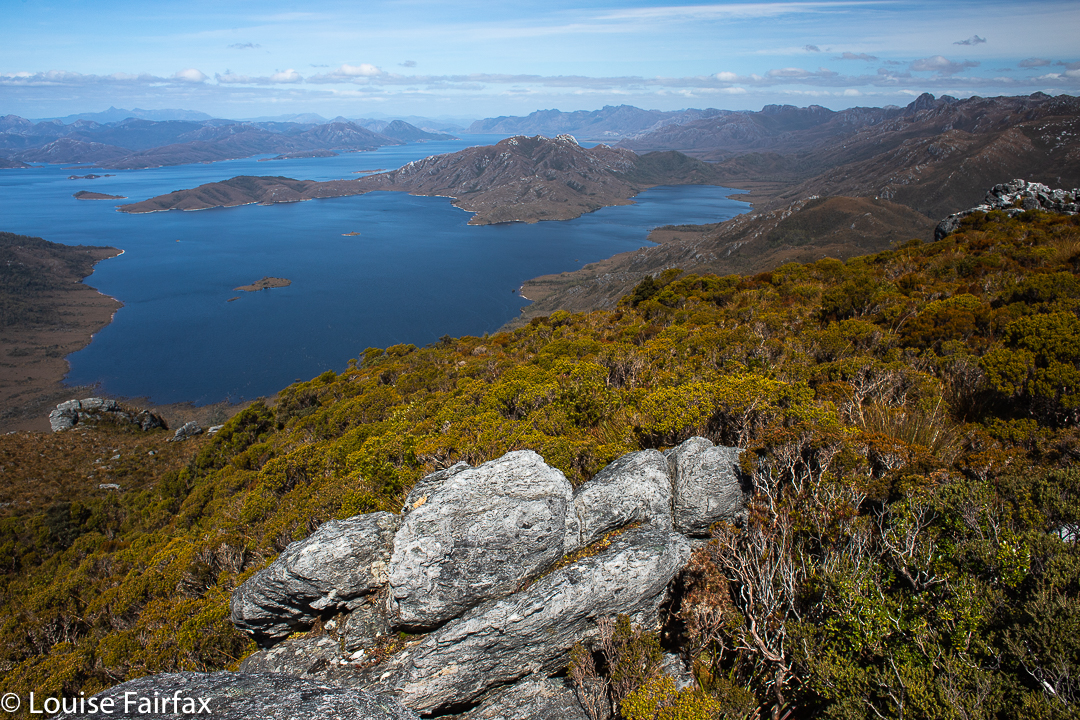 Koruna Peak? Never heard of it, but a guy for whom I have great respect was leading a walk there, so I signed up and then did some research on where it was. On the Wilmot Range; oh goody. Now I am definitely going. Three other guys also put their names on the list, so we would be a party of five: 4 males and Louise. Oh oh. Would I be able to keep up? Will I be a disgrace? Will the guys just disappear off into the distance? Oh well, I do a lot of solo walking these days, so if I do find myself left alone, it’s hardly a catastrophe, but I sure hoped I could keep up.

This walk starts with an ascent of Mt Sprent, which has, as far as I am aware, the steepest track up any mountain in Tasmania. It is a track built by guys for guys, with each step so huge that for me it constitutes a climb in its own right. For every step, the height gain expressed as a percentage of my total height is so great that I can’t just step. Well, certainly not with a multi-day pack on. I have to find a sapling or tree root or some other object and haul myself up with a few animal noises to the next level. Thus I grunted and tugged my way up the mountain whilst the others gained height with less audible and visible effort. I was never actually last in the queue, but I could tell that that was merely because I was with guys who had manners, and I was very aware that I was holding everybody up.

As a result, when we got to the summit of Sprent, I offered to withdraw from the group so they could make faster progress without me, and be more sure of reaching their goal. Dale (the leader), however, said I was fine, and then looked at me cheekily and said: “You do have a head torch, don’t you.” I smiled.

On we went, through the ice and snow on top of Sprent and then down the boulder cluster beyond to the slightly scrubby ridge below. Many of the rocks were decorated with rime – and there was a frozen sheet of water in one point – so everybody had to be careful, which greatly helped my cause of keeping up, and I managed to keep pace and even take a turn at leading once the scrub started. I was keen to try to pull my weight and contribute to the group, and not just be a parasite.

At all times we had fabulous views out to left and right as we walked, and in what seemed like a very short time, we had reached our camp spot. We had absolutely no need for head torches, and even had time to explore all over the place once we’d sorted out our real estate for the night. I put my tent in the shelter of a rock in case the wind came up, and then grabbed my tripod and camera and went exploring, climbing this and that interesting rock structure until it was time to cook dinner. Sunset offered a dilemma: should one go for the views to the west of mountainous silhouettes receding into the distance, or catch the eastern back glow with water views? I decided for west, and enjoyed the show greatly.

The middle day was just a daypack one, so I was as light as a feather and as free as a bird. I could even run over the hillside if I dropped back for photographic purposes, of which there were many. The fabulous views continued all day, and we enjoyed our climbs of the black dot of named Koruna Peak, and the high point of the same, which was actually further on, on a different peak. There were also other little structures of various challenge, so we filled our day with fun.

Rain arrived at some stage during our return journey, so once we were back at camp, we all disappeared into our tents. I did too, but kept a very watchful eye on the weather: I have been caught out before assuming a grey non-set, and been surprised by the sun finding a hole in the clouds. My watchfulness paid off: the sun did exactly that, but I had tripod and camera prepared, so raced out in the light shower to photograph the golden watery light as the sun lowered itself into the blurry horizon.

The last day was wet, but that didn’t matter, as we were on our way out and could put on dry clothes at the car. We merely had to reverse our steps of the first day, with a massively steep descent where trees came in handy to lower oneself to the next level. I swung like a little monkey, also using my arms against rocks on each side to lessen the demands on my knees and quadriceps.
Be that as it may, I have fallen helplessly in love with the Wilmot Range.