Angela crosses the creek that marks an end to the cutting grass section of the walk to Mt Weld.
Our chosen mountain for this weekend was Mt Weld. Like a well-trained bicycle pursuit team we purposefully made our way forward.
“Hm. It’s getting vague here … not sure that we’re on track,” the leader of the moment would say. Three pairs of eyes scanned; one left, one right, one middle. Within seconds one of us would spot signs of wear or, better, some tape, and that one would take over the lead until the next moment of uncertainty. Efficient, resolute – certainly “no nonsense” – are words that can describe our attitude to Weld. Having been fouled out by mist, thick bush and time last weekend on Hobhouse, we were very, very determined about the summit this week. Defeat was not on our agenda. Meanwhile, we were having a ball. The forest shortly after the creek

Thanks to reports by others, our expectations of the cutting grass were very bad indeed, and we were accordingly armed in full battle gear – and so we were delighted by how much nicer it was than our grim imaginings. The grass was a lovely colour, the passage was very clear indeed and, well, cutting grass cuts. We treated it with respect and it left us alone. The totem pole (start of the track) to the “big creek” section took us 1 hr 54: slower than the 1 hr 45 of one report, faster than the often said 2 hrs. We were on track for the summit and happy. We grabbed a quick drink at the creek and I surreptitiously threw down a few handfuls of snack (my two super-human friends never seemed to need food). Now it was time to climb. An ancient cairn, now covered in moss. Green on green is not exactly effective. Pink tapes suited us better.

Again, expectations of this section were not sanguine. We expected massive sliding backwards, energy-sapping climbing under and over logs that were too long, wide and low to get around, over or under, a pad characterised by vagueness, and lots of time wastage. What we found was magnificent forest that thrilled by its lush mossiness, its abundance of colourful fungi, its openness, and the easy passage it offered. Only very infrequently did we waste thirty seconds or so searching for the pad. Yes, down lower there was some climbing over and under logs, but not nearly as much as we feared and well, yes, we were climbing a mountain. Mountains go up. Steepness is expected and thus ignored. Besides, we love climbing. My only regret or “complaint” during the 1 hr 36 mins we spent in this rainforest was that I had neglected to bring my macro lens. I was entranced left and right by colourful delicacy but furnished with no means to do it justice. However, this trip was not about photography: it was about the summit. We had no time to waste. Lunch was thrown down in this section. 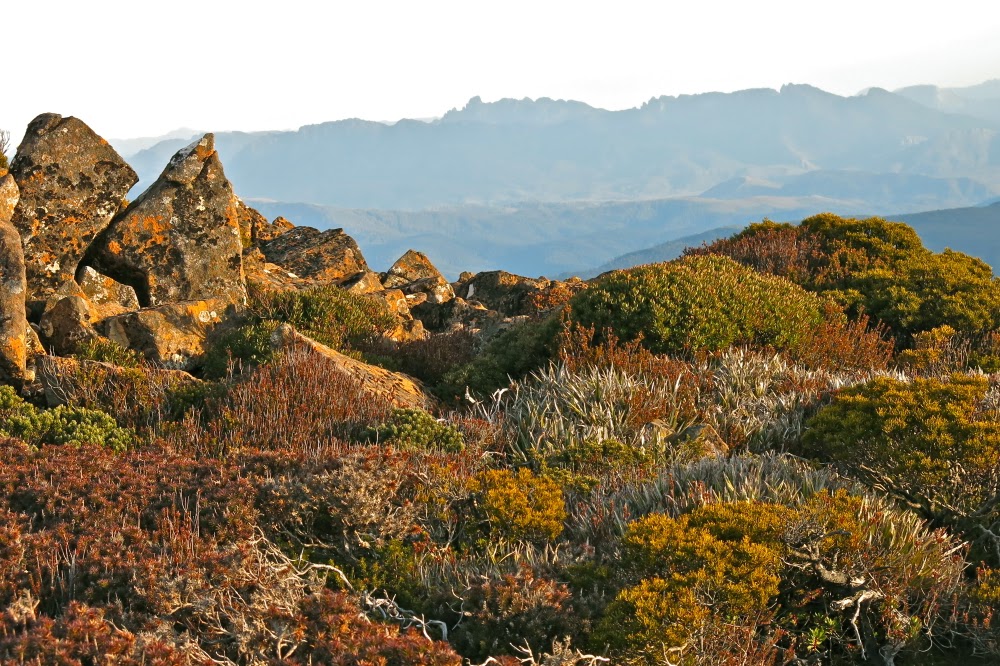 Same, but looking SW.
The next phase of vegetation, from the first noticeable bauera bush to where we emerged in open alpine grass, took us exactly an hour. The bauera and scoparia had been, well, bauera and scoparia – you don’t mess with them – but the pad was clear enough, and at last my fungi-distraction had come to an end. As we emerged onto the welcome and welcoming pineapple grass, we had our third break of the trip: five minutes, while I turned on my gps. We were happy with progress to here. The gps indicated we had about a kilometre to go to the intended tarn of our campsite for the night. The grass was short. We could see the spot up and around the corner of the ridge ahead where the tarn must lie. I expected it would take 20-30 minutes. It took us 46, as we enthusiastically climbed too quickly too soon and got ambushed in scrub. For once, the creek was faster than the ridge. No matter. We were pitching tents by 3pm. The summit was in our sights. People said an hour to the top from here. We couldn’t imagine anything going wrong at this stage, but neither were we willing to relax our guard. We spent about half an hour pitching tents and organising daypacks for the top (the latter, mostly me: I took my little pantry to the top – a bag of treats and goodies that the others, not quite so food dependent, didn’t think necessary for themselves) and off we set, full of excitement and anticipation. This was, at last, the end game. I found it very exciting to see Lake Pedder and Mt Solitary. I hadn’t realised we’d be so close.
As instructed by Abels Vol 2, we headed north from the tarn (actually, a bit west thereof) to a little shelf where camping would have been nice (better view, but no tarn) and then up through a mixture of scrub and rocks, aiming for the saddle between summits north and south. The real one (north) was reached in under an hour. We were elated: first, because we had reached our goal, but mostly by the amazing view spread out before us. It helped our euphoria that we could also, at last, relax. Our work was done. Now we could play and stare and reap the rewards of our labour, losing the self in the sublime infinitude that surrounded us. The pressure of time was gone. The lighting was perfect. Life was wonderful. We enjoyed our summit and only left when the mood finally took us. We had head torches; we knew our way back to the tents. There was no more need for haste. Looking south along the very long ridgeline of Weld
Eventually, we dawdled back in the gloaming, delighting in the rising moon and emerging stars, yet with still enough light to see all the way. I was unwilling to finish off this perfect day. Mark and Angela relaxing on the summit As near to the setting sun as I could get without lens flare.

The temperature was not below freezing. We cooked outside together enjoying the stars, the tarn and the moonlight while we ate and chatted, ultimately only being driven inside when we became aware that our core temperatures had dropped to shiver point. On the way out next day, we cut all our splits from the way in, due more to confidence and familiarity than the fact that we were descending. To our delight, we were back at the car by 2 pm, having taken 4 hrs 45 from tent to totem pole. The road walk to the car added another 14 mins. We all loved Weld and agreed we’d return with very little provocation. Rain started falling as we arrived at the car. It pelted down while we drove away. We felt smug and warm inside. Our route. I’m amazed to see how little difference there is between the higher route to the tent site tarn and the much faster, lower one that stuck more to the actual creek – 10 mins difference!