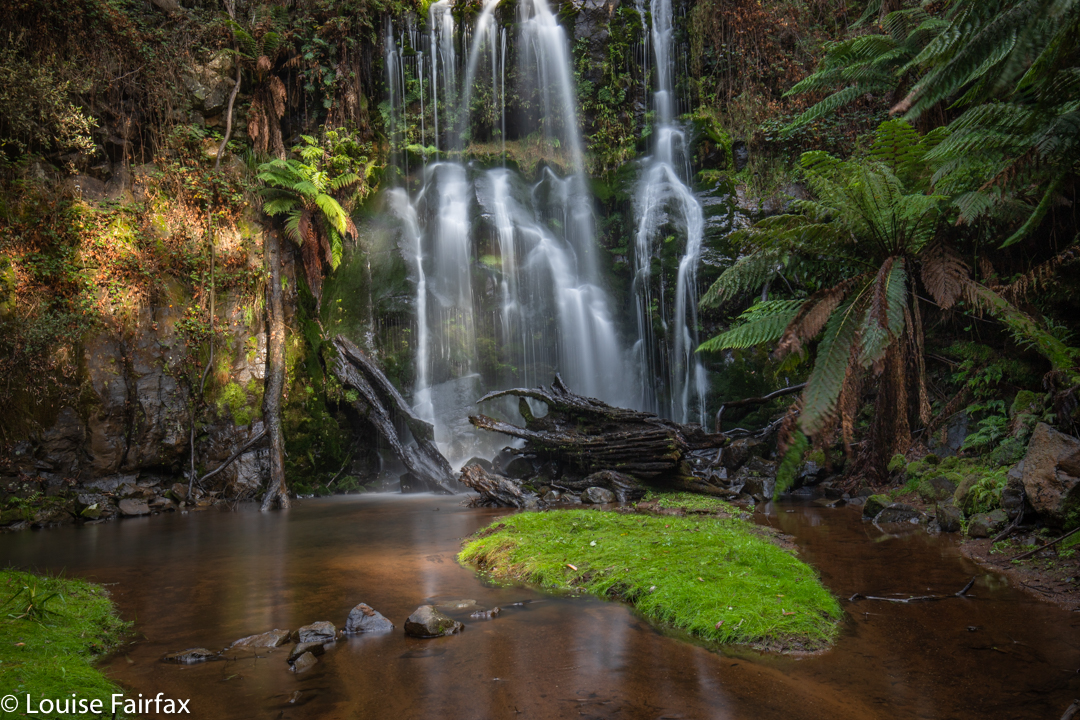 When a waterfall has three used names – here, Garners Creek Falls, Preolenna Falls and Coal Mine Falls – there is bound to be confusion. The whole purpose of language is to enable us to talk about the same thing, but with this waterfall, we can have enormous misunderstanding – a veritable Tower of Babel. We think we haven’t been there, when we have, or we think we have three to go to, but only, in fact, have one. Or worse, if you told your friends you’d meet them for a picnic at Coalmine Falls, they could be waiting for you in a different part of the state.

So, three names, but you only get credit for one waterfall. But which name should you use? The road you attack the falls from is Coal Mine Road. But there are also Coalmine Falls at Liffey, next to Bob Brown’s Oura Oura, so we don’t want two. Preolenna is such a pretty name, I love it, (it refers to the nearest hamlet, which is not far away) but I have the feeling that most people nowadays call it Garners Creek Falls, which is highly unimaginative, but does tell everyone exactly which creek it is located on. The real problem, of course, is that the map doesn’t acknowledge that this beautiful tumble of water exists, so you won’t find a helpful little blue strip across the creek. Hopefully, my map below will help out.

The immediate area of the falls is delightful. However, the drive in is not so, as you pass a large amount of plantation forest, some of which has been felled, some not, but it is hardly enticing, and you begin to believe that nothing pretty could lie in a place like this. (It is also pretty crammed with blackberry bushes leaping out to catch you). However, as I said last blog, I would much prefer to look at new growth forest, with skinny trees serried closely in neat rows than at factories belching smoke, so it is certainly the lesser of two evils. And, there is some lovely pastoral land before you hit the forest.

Also, be warned: the slide to the base from above is very steep and slippery. I wouldn’t dream of doing it in anything other than bushwalking boots. Even my boots slid. However, as the photos indicate, the rewards at the base are wonderful, and a surprise gem awaits you if you hack the drive.