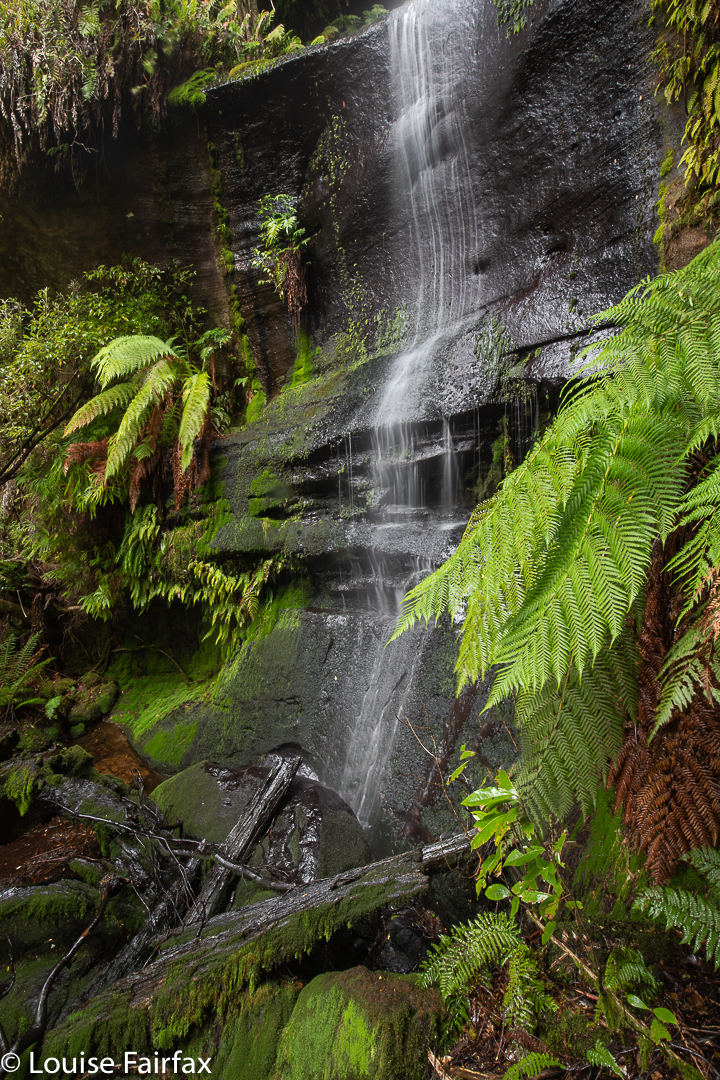 When we were walking Warners Track last week, I noticed a tantalising blue line across a neighbouring creek, and wanted to do a bushbash to see if that line actually represented a real waterfall, and, if yes, whether that waterfall  was a worthy one. The contours certainly looked promising. In fact, it could be a huge drop, looking at the map. My friend Penny said she was also interested in this matter, so we agreed to give it a go this weekend.
We parked in the same spot as the week before, but went off in a different direction, up a pretty steep slope, over and under and through numerous fallen logs, around the odd patches of rather thick dogwood and regrowth of some nature, past serried tree ferns, and there was our promising cliff line.

My gps said we were closing in on our grail, and sure enough, it soon became visible. We haven’t had much rain lately, so it was a delicate drop today – a fine and flimsy tracery of water, dropping about thirty metres in three close stages.
It’s always very rewarding to find a waterfall that is only a possibility rather than a certainty, and to make our own unaided way there through virgin bush. How lucky we are to live in a place where this is still possible.
We chose to have a slightly different route on the rebound, exploring other areas of forest, to make a kind of circle by the time we arrived back at the car. It always feels good to have been off exploring. I knew I had missed it during lockdown, but today I realised how very much I had. Warners Track had been very nice, but making our own way through unchartered forest is far, far better.