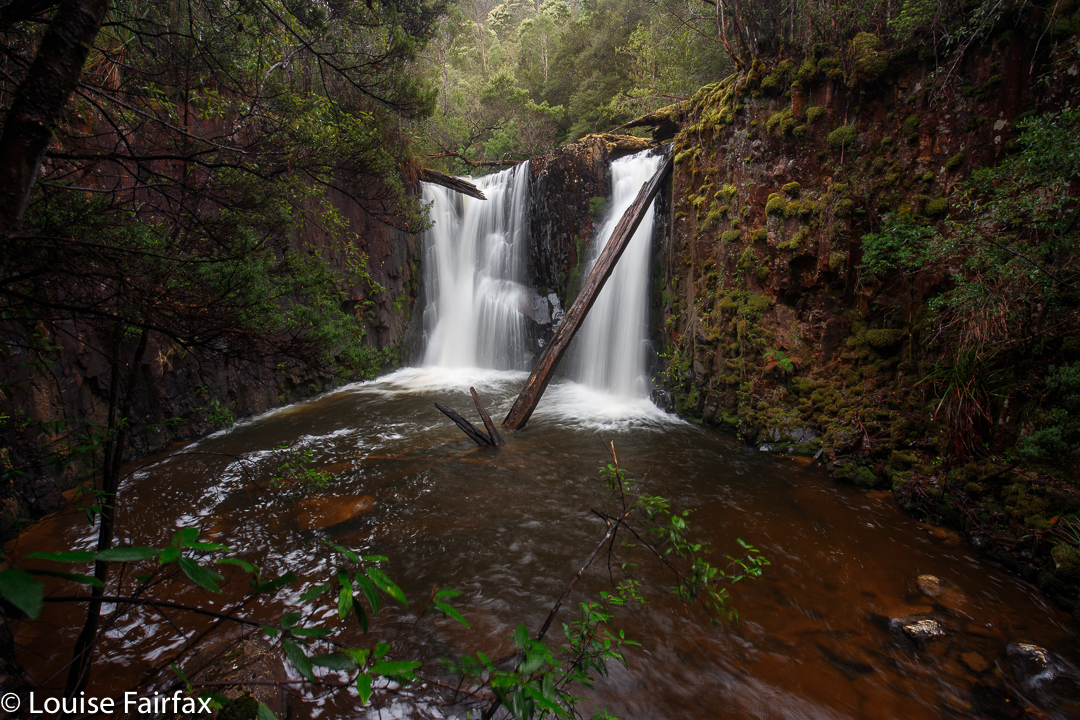 Robbies Falls are situated on the beautiful Falls Rivulet, which issues out of Lake Skinner, nestling under Mt Snowy South (an Abel). From the lake, the picturesque rivulet tumbles down over cliffs and skirts obstacles until it loses its identity as it merges with the Little Denison River further east.

Because the closest access is McDougalls Rd, we early visitors called it McDougalls Falls, but were later informed that another person (“Robbie”) had discovered it, and used to frequent it, and it was known by his friends as Robbies Falls.
Visiting it now (as opposed to when “Robbie” visited, yesteryear), there is a daunting palisade of cutting grass that has opportunistically used the available light following logging. It mounts a mighty defence to ward off visitors. A different Rob, who had worked out it should be there, plus Caedence and I, bashed through this dreadful stuff for a long time, and then gave up. I vowed I would never return. Rob was more persistent, however, and went back using a better – in his words, smarter – route, and he and two other friends got there. I couldn’t go that weekend, but once I saw the shots, I had terrible FOMO. (Do I confess, envy?) Grr. Why had I not cancelled other obligations and gone too?

This weekend, Adrian said he’d show me the new route, so I got to finish the unfinished business. Using Rob’s improved route, it was pretty easy. Warning: it is still very possible to get enmeshed in cutting grass if you are not careful! Standard contour maps don’t tell you where the cutting grass lies, so you need more than just a traditional map.

Pictured above are Lower Robbie Falls, which are not as high as the main falls, but, in my opinion,  are more photogenic.
The other – also magnificent – waterfall that also lies on this rivulet, although higher up, and accessed from the northern side rather than the southern, is Compton Falls, which have their own blog. If you are a competent and experienced bushwalker, then both falls are a total delight.
http://www.natureloverswalks.com/compton-falls/

Further directional information: Falls Rivulet lies under the Snowy Range, west of Judbury (which, in turn, is west of Huonville). when exiting Judbury, take the Lonnavale Rd, then Denison Rd, and finally, McDougalls Rd. From it, you head north to the falls.