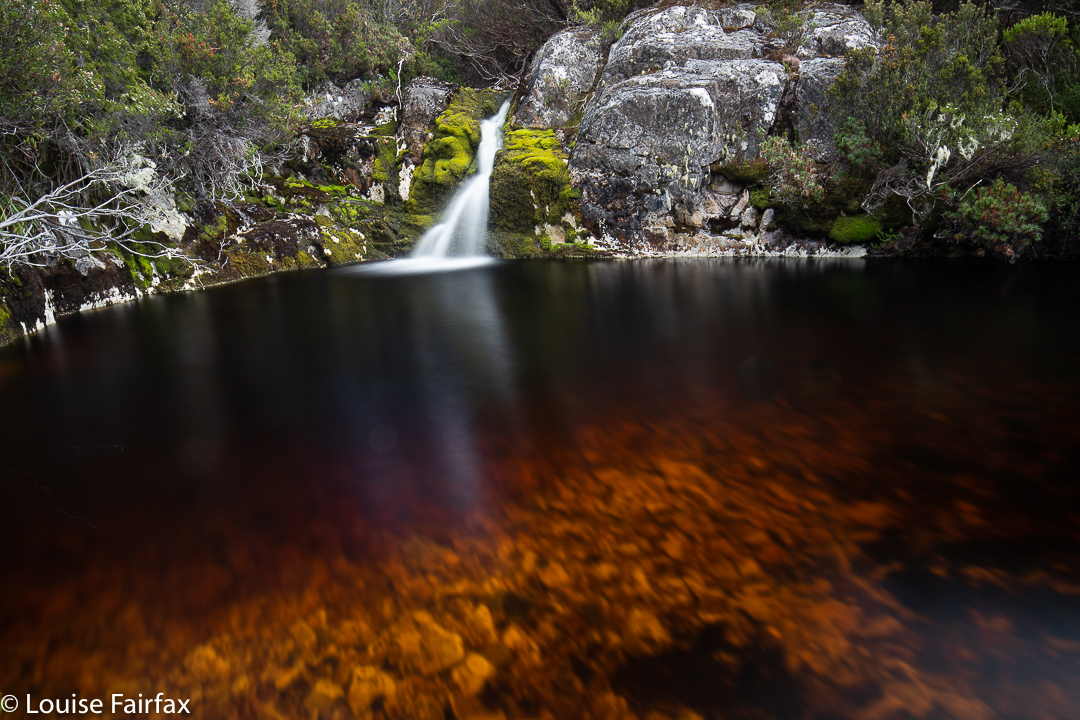 There are six waterfalls out behind Mt Campbell to be found by those who are prepared to fight for their victories, to persevere through hardship and endure a long day of goose-stepping and bushthrasing, with the very occasional easy bit thrown in. The easiest part of my day, actually, was the 320 m climb up Mt Campbell. For those who like stats, the route was 18.6 km equivalents long (12.6 horizontal and 600 vertical). For me, that meant five and a half hours of very heavy labour. I barely took time out even for lunch – munching during long-exposure shots.

What a delight that initial climb was. I didn’t know what lay in store for me. In fact, that feeling of ease lasted a little while – all along the broad top of Campbell before I descended through fagus into the valley – and I was wondering what on earth I would do with all the time left over at the end … I pondered the other waterfalls I could bag after I’d knocked off these easy catches. Ha ha.

The fagus was not too bad for fagus – I was lucky and found a way through it that didn’t slow me down too much, so was feeling fine at my first big saddle as I headed along on the ridge above the Campbell River. Below me lay the tranquil strip of water that I hoped housed my treasure (I wondered if there would be enough for a flow). It looked utterly benign down there, so I was cozened into descending to river level for an easy ramble by the Campbell.

Well, yes; maybe that lasted ten minutes. Then I began to encounter bands of scoparia, innocuous at first, but which quickly became increasingly impenetrable. The change was gradual, so by the time I realised I was in to the point of being out of my depth, it was too late to escape. I had no alternative but to bulldoze my way out – not easy with my build. I crossed and recrossed the river, trying for an easier passage, but soon became enmeshed in head high junk. Push, shove. I decided to just get in the river and go downstream with sodden feet, but not even that worked: the entanglement of overhanging branches meant that even a wombat would not have an easy time of it. Only the tiger snake I met could move. Luckily he didn’t like me.
One and a quarter hours after beginning my descent I felt completely demoralised. I was also hungry, but told myself the waterfall was ‘just around the corner’, and I had no permission to eat until I had found it. I know the time gap, as I took photos before the descent, and at this point in time being discussed: I gave myself the small treat of being allowed to photograph an alpine fungus (Lichenomphalina chromacea above), and a boronia citriodora. From deciding the waterfall was due any minute now (using my gps) to actually sighting it took a further 53 minutes!!! But I was determined. I had spent so very much energy getting this far that, tempting though it was, I was not prepared to give up.

When I found a waterfall, I was full of glee at the victory, and joy at its beauty. This was such a remote spot, a battle hard-won, but here I was, perched in a bed of bauera, feet over the water (prevented from soaking by the same bauera) enjoying the moss, the palpable silence, the colour of the tannined water, the white streaks of its flow and the total absence of intruding human infrastructure. And now I could have a bite to eat. Hoorah. I didn’t care at all that this delicate beauty was only 5 or so metres high. It was mine, and I loved it.

Finished with all I wanted to do with my camera, and having already spent two and a half hours getting there (which meant a five hours’ walking day if the return was as slow as the arrival), I packed up and decided to leave. The other waterfalls could wait. I consulted my gps. Oh no. The falls were marked as being 50 ms further downstream. I knew I’d be disappointed if the ones I had were not the real ones, so decided to do the extra 50 ms. That took me 7 minutes! But OH WOW. I found two waterfalls, the second of which was huge.

The trouble is, I was exhausted, and now worried about the return journey. That said, I decided that climbing straight up the ridge opposite could offer the best exit from this prison (surely the guards didn’t man that direction), so thought that if the climb went well, maybe I could continue after all. The climb went well – a mere 30 minutes – so I decided to take a peek at what was now Campbell River Falls 4, and also take in properly, 5 and 6.

As I hoped, the going was much easier on this next part of the trip, which is why I was able to take in the extra falls before exhaustion set in.

It took an hour and a half from Falls 5 and 6 to get back to the summit of Mt Campbell. My fuel tank was pretty empty by this stage, and as I tried to raise my leg high for each step up Campbell (required by the knee-length shrubbery), I was very, very glad that I didn’t do any more than I did. It took willpower to omit a proper view of Falls 4, and to skip the base of Falls 3, but I was at the end of the energy bottle now, and glad I hadn’t run out sooner. I still had to reach the summit of Campbell, and then get back to the car. (The descent was slower than my earlier ascent, testimony to how I was feeling.) The drive home scarred me. I had had to get up at 4.50 this morning in order to evade the guards of the road to Dove Lake before 8 a.m. I needed this just in case my mission finished after 6 pm. If it had done so, I would be stranded for the night. When is a National Park not a National Park? When it has been so given over to tourists that bushwalkers no longer count. Funnily, their rules don’t let us take a car in if we need to finish late, and yet we are also not allowed to camp. Catch 22, stupid bushwalkers.
(Please note that if you are an interstate or overseas bushwalker, I count you as bushwalker and not tourist. Tourists are people who come in without regard to the land or the people, who litter, and who are interested in getting a quick overview of a few icons to announce to their friends that they have been there. If you are a Tasmanian who drives in, takes a quick pic and drives off, then you are, in my mind, a tourist. Tourism is an attitude, not a state of being. If you love the land and care for it; if you want to know it intimately and appreciate its arcane secrets, and seek to leave as little trace as is possible, then you are not a tourist.)