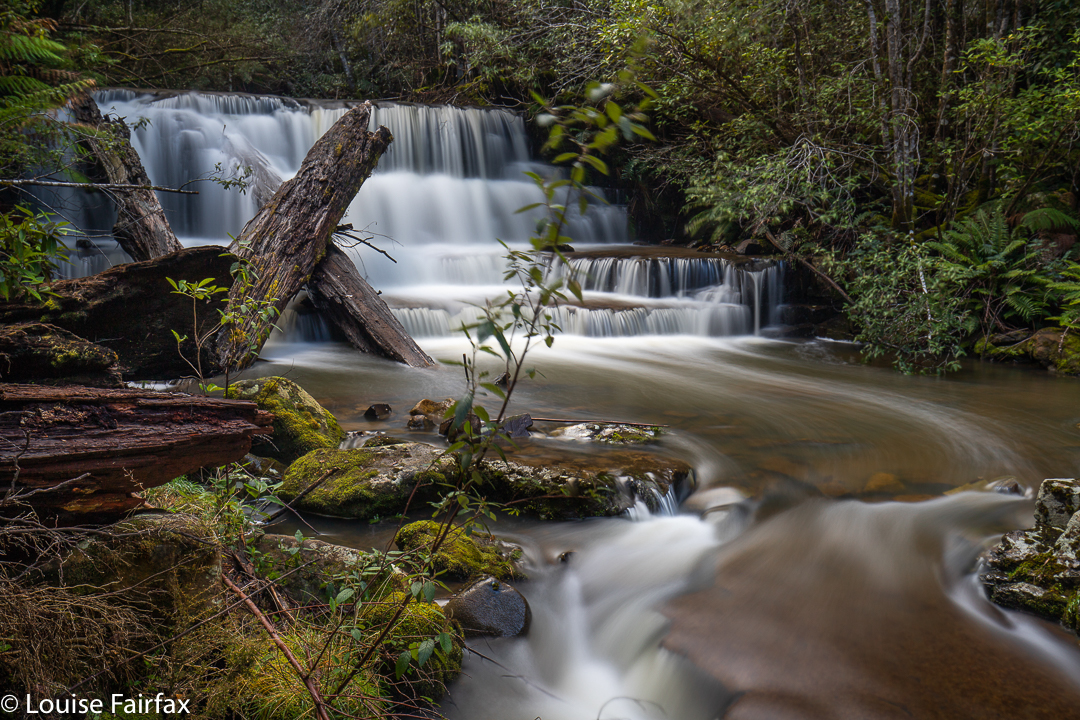 Black Glen Falls are situated on the Lachlan River, south of the hamlet of Lachlan, not too far from New Norfolk, which happens to be but a small digression from the Launceston to Hobart drag.  I thus decided I could easily drive down from Launceston, visit these falls (plus the Glenorchy Falls and the New Town three Falls) and be in time for the children’s after school pick up.

As with many waterfalls, the hardest part was getting to the start line. I drove south along the Lachlan Rd, as I was supposed to do, and avoided the turn to the left to Hydehurst Rd, as instructed, but after a bit more driving, I came to another turn to the left, but not one that was labelled Timbs Rd, the road I was seeking. I stopped and got out to consider this matter, and a friendly local pulled over to help me.
“I’m looking for Black Glen Falls.”
“Never heard of them.” Oh. And he’s a local.
“Hm. Have you heard of Timbs Rd? I’m supposed to find it first.”
“Yeah. That’s easy. Can’t miss it. About 2 more kilometres and you’ll see it.”
Thanks given, I continued on my way, and found Timbs Rd with no further ado.

The WoT website says there is a bridge (tick) and to park there. But silly Louise thought she could drive her AWD up this 4WD “road”, which looked quite harmless, so on she went. Oh the fallings of the proud. I soon enough found myself backing about 200 ms, once the road conditions deteriorated from very bad to shocking. Next time, I will park near the bridge and walk the mere 900ms to the old car park, official start.
From the official start (allow about 12 up, 10 down), it took me 26 mins to reach the first of the falls (which is actually Falls number 2 of 5). Before that happy moment, endless pleasant cascades can be spotted, including one just near where the river should be crossed. However, the river was quite high and strong, so I elected not to cross, and had no trouble staying on the eastern bank the whole time.

There is a path most of the way, and helpful tapes to guide. That said, I would not do this walk if I were not confident in the bush, as birds and more can run off with pink tape, so you need to know what you’re doing. The other problem is that the falls are not actually marked on the map, so you are basically at the mercy of the tapes to get you there, as the Lachlan River has many unnamed side tributaries, so I became very uncertain as to the whereabouts of my destination. You have to combine tapes and pad with a bit of “bush nouse” and then all is well. Use my map below to mark the spot on your gps, and you should be right.

If you persevere with a bit of uncertainty, you are well rewarded at the far end. The falls – cascades plus five falls – were all a total delight. I plan on taking the children in summer, when we can picnic on one of the many rock ledges, and they can paddle or swim in the many pools. Each waterfall has its own little rock ledge. The bottom falls looked less interesting than the ones above, so I didn’t drop down to them. I photographed Falls 2 (where the track leads), and then just kept going upstream for more and more. Eventually I ran out, so hoped there wasn’t another left hidden above, and returned to the car, to make it to New Norfolk for a delicious lunch in an old church, now a Quilt Cafe.

Glenorchy Falls were far too suburban for my liking. It was hard to ignore the concrete and rubbish that unnecessarily decorated what could be beautiful if someone put in a bit of effort. Box ticked. I won’t return.
At last I saw the New Town Falls flowing. Third time lucky, but that’s another story …. .