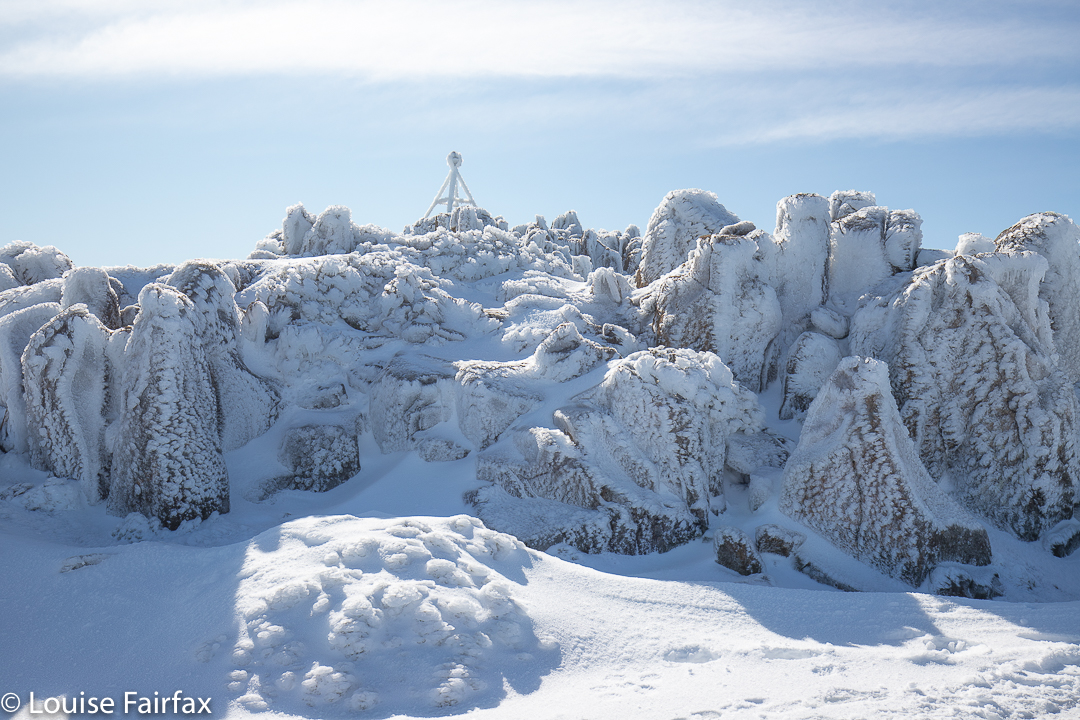 When a daughter says to come down south ’cause she’s free on Friday, and the two of you can ski on Mt Wellington, what quarter-sane mother would say: “No thanks”? Certainly not this one! I packed my skis and trappings and headed south on Thursday night, ready to begin nice and early on the Friday.

We dropped the children at school and drove straight to The Springs, where the road was (as expected) closed. With that nice early start, we had a good parking spot, right near the start of the climb. Let the fun begin.

We were carrying “boot chains” and spiders (mini crampons) – utterly necessary – but had not yet attached them. However, the need arose quite quickly, and at the second icy patch, we stopped to put them on, after which the going was a lot better. My daughter kept eying up the terrain for ski possibilities, but the track was far too steep to even think about it. There would be no skiing until we were on top. I slowed things down with a few photos on the way (I just couldn’t help myself), but soon enough we were on top, and deciding which direction we wanted to pursue.

I turned my back on destruction and noise, and gave chase to my daughter, who’d gone off in the direction of the unspoiled fields to the south. Funnily, only one of the other people who’d walked up that morning ventured south, which meant we had this whole huge playground to ourselves.

The pictures tell you of the extreme beauty we experienced that day. How incredible it was that right below us, admittedly nearly 1300 metres below, was the capital city of our state. We could see not only the city buildings and ocean, but even the sand of its beaches. But we were up above the clouds in a land of white (and blue). It felt like we’d accidentally arrived in heaven.