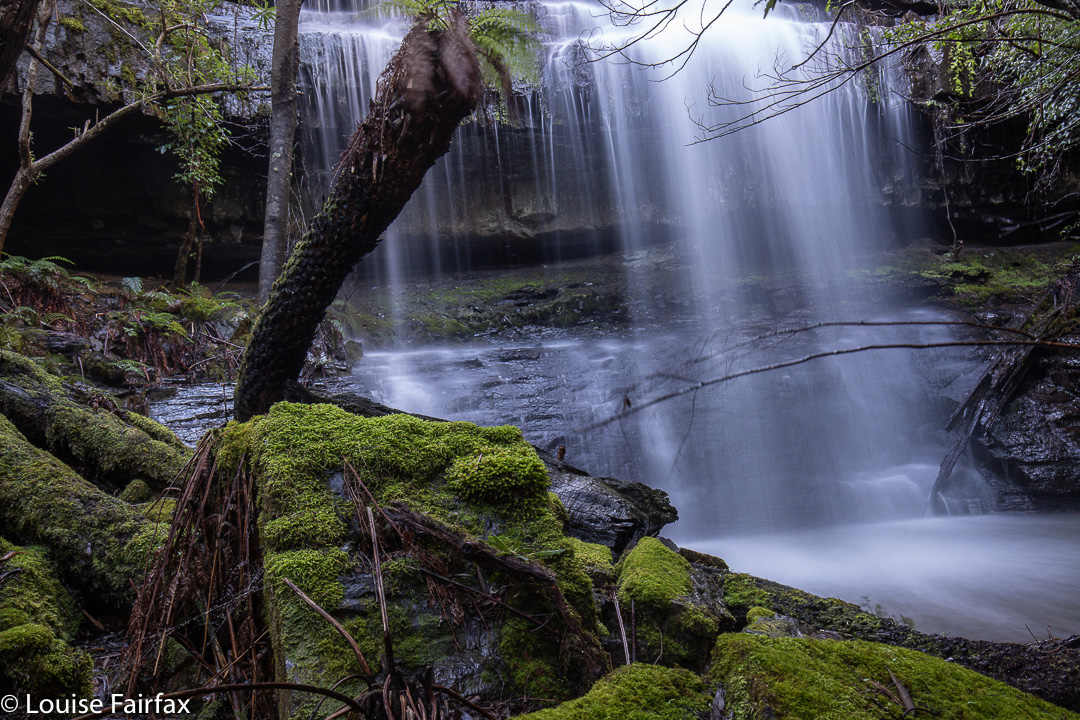 Flora Falls, being situated at quite a high altitude, do not have an expansive catchment area, and so require of the keen photographer a visit either soon after rain, or in sync with snow melt.
As we had had both rain and then snow in this last week, I felt the timing was good for a visit. This waterfall has long been on my bucket list.

As said, it had been snowing, but I was not expecting quite THAT much snow!  As I drove higher, the landscape became whiter. Black ice patches appeared on the road – along with white – but both eventually ceded to pure snow, mostly with two black lines through it where others had driven. The bank-up of snow in the middle scraped the underbelly of my Subaru Forester. Driving in a 2WD would have been impossible. It felt quite isolating up there in those conditions.

I parked and decided to take Tessie for a walk on the “road” (where she froze her precious tootsies) before I went searching for the falls. She needed some exercise, and I thought it might give the snow some time to melt. The sun was shining, not that the temperature signified that. While we were walking along, some local residents pulled over. “Is that a Smithfield?”, they wanted to know. (Anyone who has ever owned a Smithfield can spot one at a hundred paces, and is violently in love with every exemplar they meet, it seems.) We got chatting, and, on hearing I was about to visit the falls, they assured me they were pumping, but both said: “Do be careful. It’s hideously slippery down there, and the rocks are really loose. Don’t rely on any rocks.” The guy appended: “I wish you weren’t going alone.” I added their words to my little stock of other dire admonitions. Such multiple warnings do tend to make me nervous.

Body now full of adrenalin, I popped Tess in the car and set out across the snow on my solitary journey with my fate today. Soon after entering the forest I could hear the creek, and duly followed it along, sometimes near, sometimes higher, as occasion demanded. Once “on the job”, my concerns in anticipation soon vanished. I was always like that before races: terrified near the start, but once the gun had fired, all else was lost in my tunnel of concentration. I took each moment as it came.

After not too long, I found a lovely cascade which I knew was not what I was looking for, but, as it was beautiful,  I stopped to photograph it anyway. This would put off the moment everyone was warning me about, if nothing else. All up, I saw and enjoyed two cascades, as well as the three (I think it was) tiers of the Upper Flora Falls, and the two tiers of the Lower. I called the Cascades Upper and Middle, leaving room for a lower should it exist.

Back at the car, I was just putting my gear in and another local driving by stopped to make sure I was OK. With that much snow on the road, he was concerned, but decided a Forester would be fine. I really appreciated the fact that two different cars stopped to check on my safety.
It was time to drive to South Hobart where my daughter had freed herself for a picnic lunch in the sun, staring up at a snowy Mt Wellington. That afternoon, I would go bushbashing along the various tributaries of the Hobart Rivulet, where I would find three new (for me) waterfalls. It was a busy – and a rather exhausting – day.

Here is sunrise from last weekend. I love ones tha

Cracks and fissures and the core of the Milky Way.

Growl . Insta wiped my blurb. And cropped my shot

Anyone watching the tennis tonight? I am feeling s

Does anything beat early Tassie light in the mount

Probably far too late to post, but I nearly forgot