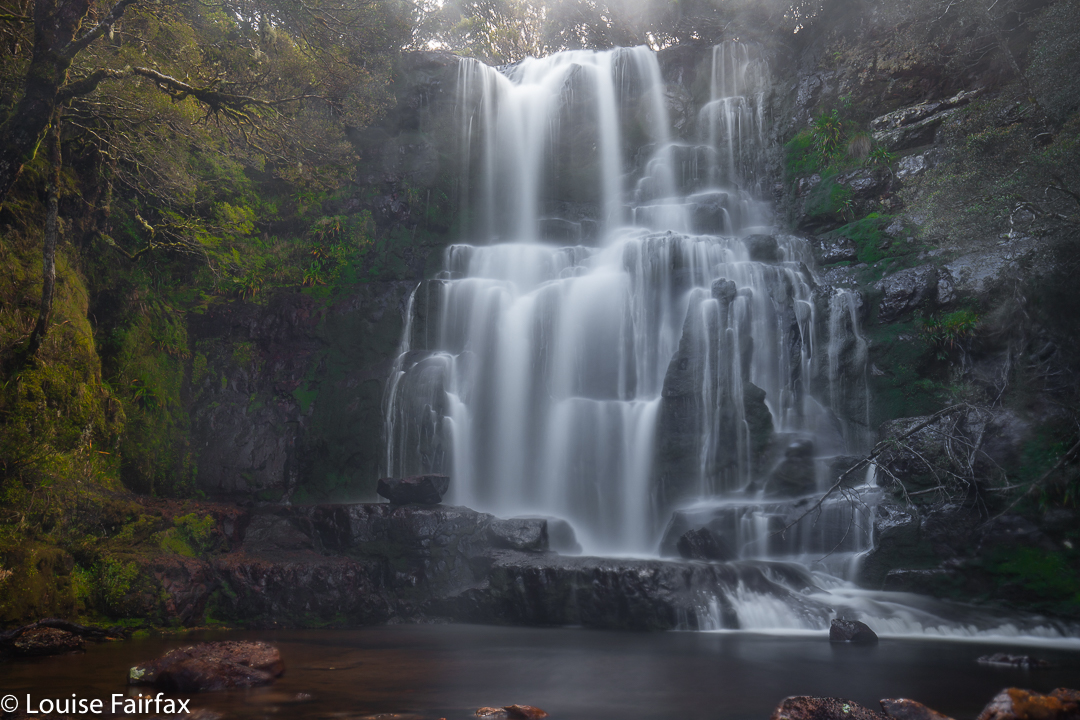 My friend Craig called to discuss my route to Orites Falls in 2016, and mentioned in the process that I was welcome to join the small group that was about to go. Would I like to join them? Do children like chocolate? How wonderful to have an excuse to revisit an area that I loved the first time around. The territory at the back of Mt Hugel is wild and somewhat unfriendly to those who would like to pop in for a chat, but it is wonderful once you’ve got past the bristly facade.

It is so lovely to be walking with a handful of likeminded people: fellow bushwalkers and nature lovers, bonded more by that than a passion for waterfalls, but all willing to embrace the beauty of Orites Falls nonetheless. I loved these falls so much that the first time I was there, I couldn’t wait to come back with my tripod and a few filters to slow the water down.

Of course, the section to Shadow Lake from Lake St Clair Lodge was easy and spent in pleasant chatting through wonderful lush rainforest with heaps of fungi beginning to colour the landscape. Fagus also added colour (nothofagus gunii). We had a snack at a small beach by a giant pencil pine and continued on our way, along past Forgotten Lake and to the rock slide providing the approach up to Little Hugel. Once you’ve gained the ridge, you’re on your own, with occasional pads to help you, but not often, and only while your route intersects with that taken by people climbing “big” Mt Hugel. There are some little tarns under the Hugel ridge (at about 1245 ms asl), and the shelter from the quite strong wind afforded by a little copse of Pencil Pines provided the ideal spot for our lunch. The ground was soggy, so I squatted instead of sat to keep drier.

After lunch, we climbed up to 1330 ms to a knob that is unnamed on the map, but which was christened on day 3 “Craigs Curse”. On day 1, however, it was no curse, and offered us lovely cloudy views to Lake Hermione, our destination for the night, about 385 ms below. That is 385 vertical metres. The horizontal measurement is not all that great either, but it took us two and a half hours’ walking to negotiate the protective palisade of bush between us and the water. Eagles have it easy.

The others agreed to my vote for the ridge running NW from the knob, as I had used it before and found it better than a more direct route, especially on the way up, but the others thought it would be good to use it on the way down as well. The clouds rolled in and down we dropped, hopping across boulders with scoparia traps underneath, and down into general scrub and some exceptionally steep rocky bits. But it was a devil I knew, and I knew it would work, so on we pushed. What a glorious moment it was when we burst into the band of rainforest with its relatively easy passage and rich greens, and swung more in the direction of our goal.

The final button grass drag was tiresome, as it felt like time to arrive, but arrive we eventually did, and chose our glorious real estate for the night. Dinner at the marvellous al fresco restaurant was a wide choice of dehydrated-now-rehydrated fare with different names on our packets, but not a huge difference au fond. We compared notes on flavours, as one always does bushwalking. By the time we erected our tents, photographed the beautiful lake, collected water and had a general explore, it was getting dark and cold, as is the norm for this time of year.

This was the day for the goal of most in the group – those who had a finite, concrete goal rather than the more abstract one of enjoying being in a beautiful wilderness area. We did have a focus, and that was Orites Falls. As I had been there before, I was given the helm again, and led us up to the rainforest band on the other side of the river to follow it along until it was time to drop to the falls. Even though we were camped not far from the general source of the Franklin River (a tiny bit to the NW of our spot), it was still quite tricky to cross, but I knew it was possible near the lake, so we went to where it issues from the wider area in a magic bunch of pencil pines – how old? a thousand years? Who knows?

The photos say all that needs to be said about the falls. We loved being there, and stayed a nice long time, only returning in time for lunch. It was about an hour and a half each way and the rest was taken up in photography.

In the afternoon, we each did our own thing, with the three waterfall-fanatics visiting what I decided to christen the Franklin Tarn Falls (they not having a name on the map, and needing one so we can refer to them). I had also already been to these ones, but they were dry last time. This time, I left my camera accidentally in the tent. HOW does a lover of photography do THAT???

Craig and Caedence have both promised me a photo to commemorate our visit. On the approach, I took the route I had used last time. While there, I spotted a lead in the forest on the other side of the stream and the others agreed to test it out. This northerly route was a heap more pleasant, even if a bit longer, and three minutes faster: 23 minutes there from our tents; 20 minutes back. Meanwhile, Adrian explored the Franklin source area to the north, and Leandra intended some quiet reading in the tent, but she did mention some quiet involuntary snoozing instead.

I always think it’s good when you have bad nightmares about something, as the reality can never be as bad, and then you have a pleasant surprise. My worst-case scenario for this day was not a pleasant dream. All night, the wind howled like a demented monster, and the rain lashed at the tent. Some of us didn’t have the right clothes for such weather. Should I really lead them up to the exposed rocks on top? Craig was all for going further around, and I thought the protection that route offered could come in handy. We’d set out and decide later. Meanwhile, I’d done the lion’s share of leading on the past two days and was mentally tired, and was also physically weary as my monstrously heavy camera was now in my pack to protect it from rain, instead of around my neck where the weight wasn’t all placed on my poor shoulders. I needed pain killers to cope. Luckily, Adrian took over the job of leading through the scrub, steered by Craig who had plotted our route from day 1. It was nice and relaxing not to have to make decisions for a while.

At one particularly difficult spot on the way up, which challenged one of our group with the exposure involved, I thought we weren’t going to make it, but my worst fears were faced, defanged, and then not realised anyway. At lunch by the same tarn we’d dined at on our way up, I was, apparently, grinning like the proverbial cheshire cat. Now we were in the land of easy walking, and there was no way we wouldn’t make it out. We were a happy group. I even allowed myself time for a little fungi photography on the final leg of the journey.