In the 1320s, Petrarch wanted to climb Mt Ventoux (Windy Mt), as he was curious to see the view from the top of that mountain that dominated the landscape where he was situated at the time. In those days, climbing a mountain was not regarded highly, so he tried to justify his actions by precedent: King Philip of Macedon had climbed Mt Haemus to satisfy his curiosity about the view, so why couldn’t he, “a young man who holds no public life” do likewise? Having assuaged his guilt at seeking to admire something so tellurian as a mountain, Petrarch’s next problem was to find a suitable companion. His words, written 700 years ago, mirror my own concerns when choosing a fellow climber. He wrote: “I now began to think over whom to choose as a companion. […]. One was too apathetic, the other over-anxious; one too slow, the other too hasty; this one too gloomy of temper, that one too gay. One was more simple, the other more complex than I should have liked. This man’s taciturnity, that man’s loquacity; the heavy weight and obesity of the next, the thinness and weakness of still another were reasons to deter me.” His solution was to choose his brother. Like Petrarch, I have had a plan: namely, to return to the Western Arthurs and climb the peaks I walked past last time. Like Petrarch, I too would normally choose a family member. But this trip was too ambitious for my husband; my first-born daughter has a baby to mind; and my second-born daughter not only lives far away, but never has any time free for such extended trips. Meanwhile, my venture was too dangerous to do solo. My plan got put on my queue of other similar plans with problems. Imagine my delight when I received an email from a new climbing buddy asking me if I would like to do the trip I had been forced to postpone. Excitedly, we made our plans. We’d climb everything as far as Pegasus (which I had already climbed) and then, on the third day, descend to meet up with our Pandani club friends and climb Mt Robinson with them. My husband would come in with the Pandani group. I have my old photos; I have seen those of others. Nothing, however, can quite succeed in conveying the wonder and glory of the view that begins near the top of alpha moraine and continues with you as you delight your way along the ridgeline of the range. It’s not just that you can see “forever” (so it seems), or that the mountains that form layer after layer of graduated silhouettes are so shapely: part of the allure is from changing focus from infinity to macro and still finding wonder. For me, the rocks are particularly appealing. Some are piles of pancakes; some have been twisted and warped, while others jut sharply into the sky. Some are soft grey, others pure white; some have a hint of pink. Unfortunately, most of the wildflowers had finished for the year, but stunted Eucryphia (leatherwood) perfumed the air with their blossom as did another (unidentified) regrowth plant, which seemed to project its fragrance afar like a ventriloquist. There were some Blandfordia (Christmas Bells) in flower, and an orchid or two; the Drosera (sundews) had huge flowers, and the darling Utricularia dichotoma (fairy aprons) spotted the dark mud with their delicate mauve beauty. Up high I saw a few Ranunculas. Meanwhile, the approach of autumn was heralded by mycena and hygrocybe fungi. Near and far, it was all magnificent. The other thing I love about mountains is that you have to climb them, and I adore the act of gaining height: I find it exhilarating (and hate being asked to stop before I reach the top). In the Western Arthurs, there is an endless variety of lumps and bumps. It’s one of the best playgrounds imaginable in its perfect provision of “structures”and vistas. Once we were up on the ridge, forward movement was retarded by much clicking of cameras. Who can resist, with sparkling, tannin-coloured, white-beached lakes below; a cornucopia of other mountains around, and the blue of the much larger expanse of Lake Pedder to the north, and Bathurst Harbour and Cox’s Bight in the southern distance? We only climbed two mountains that day (Hesperus and Capella Crags), but were very satisfied as we descended to Lake Cygnus. 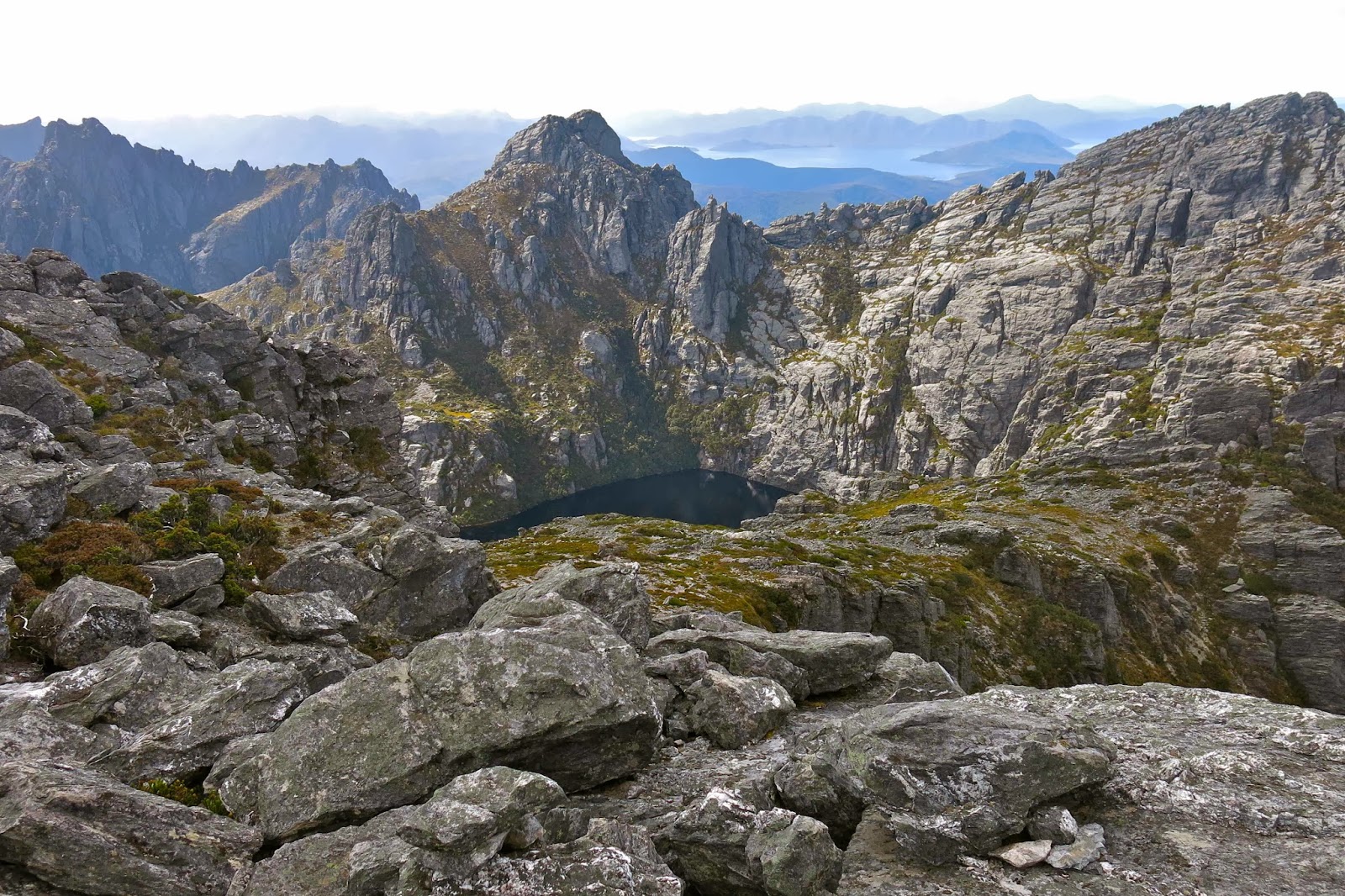 The next morning I was up before dawn and reclimbed Capella Crags before joining John for breakfast and the day proper. The sky became bluer as the day progressed, and we feasted on more wonderful high views to eternity. After Hayes and Procyon Peak, we tried to do the back route to Orion, but after 49 minutes gave up in a scrubby gully that looked as if it could lead to the summit, but gave no guarantees. For most of our route, drops into Square Lake were huge and precipitous. I was worried about ruining my camera if I fell in, but John assured me I’d be dead by the time I hit the water, so wouldn’t be bothered by this detail. Later, from Square Lake, we could see that the gully did not end in an unclimbable cul de sac, but we couldn’t waste the time experimenting when there. Off we set up Orion on a longer but easier way. It had been fun being adventurous and forging our own route. Mission accomplished – on top of Sirius, our last mountain I think the views from Orion were perhaps my favourite, although I did love Sirius as it marked our “mission accomplished”. It was with a jubilant spirit that we waltzed our way back behind the mountains, popping out at various saddles that offered views to the north, and wended our way home to Lake Cygnus. Day 3.
Once more, I was up before dawn, donning warm clothes and grabbing my camera to race to my chosen saddle window to see the sun rise behind Mt Anne. There seems to be something faulty about my hypothalamus, as I have trouble recognising satiety, so kept climbing, finding myself eventually on Hayes (but photographing while I went). This dawn was my favourite sort – soft pink tones over fluffy cotton balls in the valleys. After breakfast and a very leisurely decamping process (trying to avoid departure), we left our haven. Instead of following alpha moraine back, we pursued a spur leading not quite 180 degrees from it, and connected up with the Port Davey Track much further along. This spur is marked on old maps as having a route, but we found no trace of one. The fire of a year ago burned the vegetation out, and you can still smell ashes. Yabby holes abound. We got very black indeed. It was great fun freelancing over the hills and far away, choosing our own sub-spur until we reached the track again. Later that afternoon, the Pandani Group arrived, having walked in from Scotts Peak Dam. Everyone except wusses swam. I went to bed disguised as night.