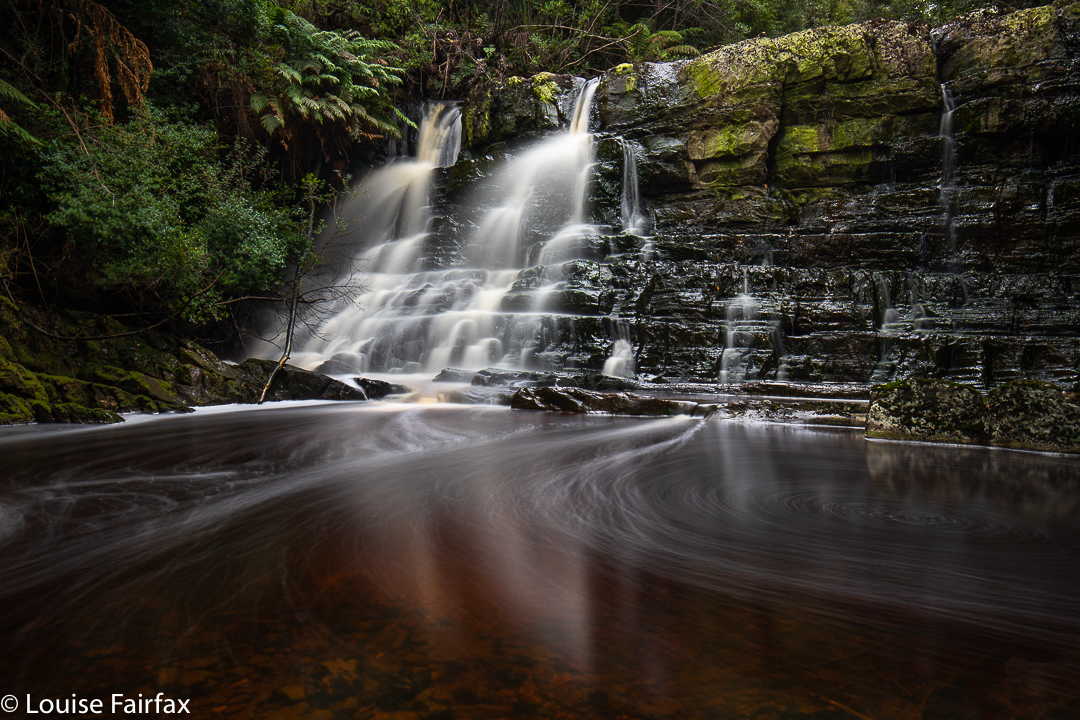 Gibson Creek Falls were definitely the pièce de résistance of our waterfall bagging spree on this day, when we had spent the morning seeing nearby Dip (Upper and Lower) and Little Dip Falls, picnicking adjacent to the drop with our backs to the tourist infrastructure, choosing for our seats natural, slightly-wet earth rather than picnic tables. (My choice, but my friend went along with it. He possibly doesn’t dare contravene).
Gibson Creek is a very long way from my home in Launceston (Google says 3 hrs 13 mins one way), so I was glad to combine these falls with the Dip trio, and very glad to have the offer of a co-pilot: someone to keep me awake for the bulk of the long drive, someone to save me stopping and checking my map all the time in between Dip and Gibsons – both kind of near Mawbanna – and someone to take over the wheel for a part of the return journey so I could recharge my batteries for the final hour of solo driving. I sure struggled to stay awake and alert during that final hour.

It was a big drive, but Gibson Creek Falls are worth the effort, and that is despite the context in which they occur: one of the ugliest clear felling you could imagine! The stench of the burnoff afterwards filled my nostrils and lungs. They have totally trashed the forest. You wade through huge piles of debris, but not for too long (even though it is vast in the other direction), and then you are in pleasant moist green forest.
I had seen photos, but they hadn’t quite alerted me to the splendour of these falls. I was entranced. It didn’t even take ten minutes to reach them. I waded through the piles of former forest, but that didn’t last even three minutes, and, once in the bush, consulted my gps to get direction, and headed straight for the falls, just a couple of minutes away, aiming off just a tad so I’d know to head upstream once the water was reached. I rudely left my friend behind a bit, as I knew he’d reach them in his own way. He was busy trying to relate where he was in the trash to where he’d been last time, when it didn’t look quite this disastrous. The original road had disappeared under rubble. I didn’t care about that relationship; I knew where I was in relation to the falls and was all impatience to get there. Ahh the colour of that tannin-filled water. How I love it, and how I revel in the lines of flow at the base of such a waterfall: the tiny white streaks of whirl as the water indicates to you the course it is taking by the circulating lines of bubbles it leaves.

We spent quite a while enjoying the beauty. S redirected a plank of tree that had fallen to make a kind of bridge, which we crossed for the heck of it, just to play as playing is fun, and then we returned to the car. S could now see the old track, so wanted us to follow it to see where it emerged from the forest. It had tape and was muddy underfoot, so I much preferred my very direct approach route. I am a stickler for wanting to “do it myself”, without tapes and certainly without tourist highways. The joy of the find is that much greater. I laugh when I see tiny Abby, insisting on dressing herself, not caring one scrap if the clothes are on inside out, back to front, upside down or all three, as long as she has done it herself. Her daycare centre has a school uniform, but she has never once worn just the regular uniform, insisting on her own choice of clothes, with the uniform then inappropriately crammed over the top to reluctantly comply with the rules. Ach, genetics.
I’ll add a map after the weekend, especially if someone reminds me. No chance before next week. Sorry.