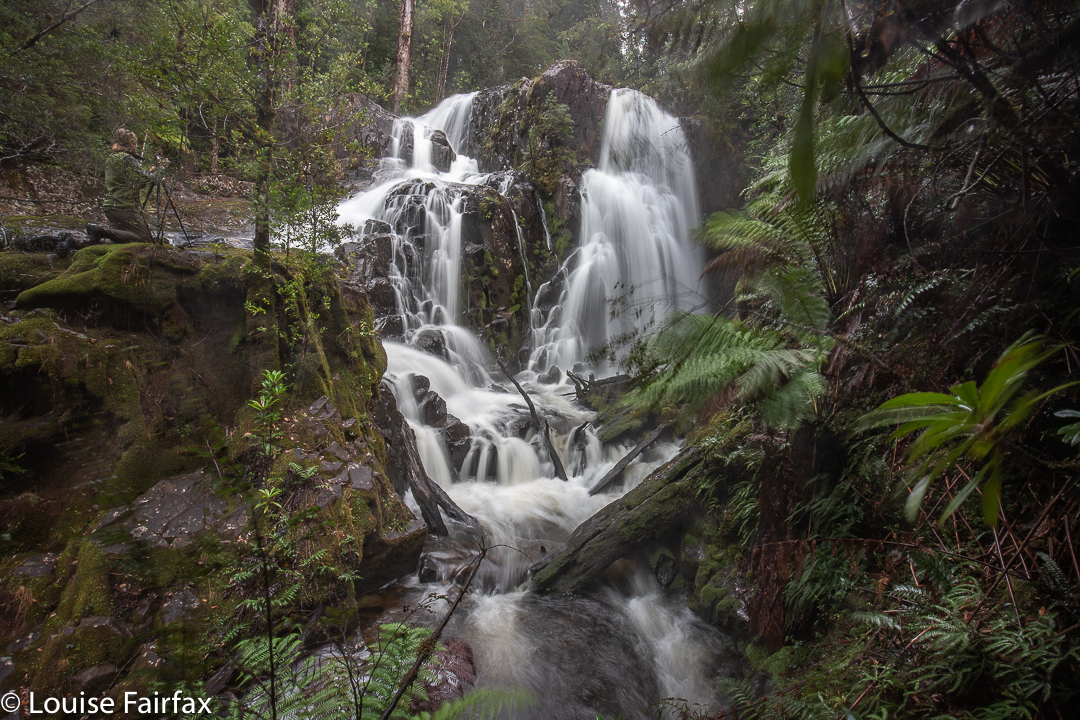 Because Compton Falls happen to be one of my favourite waterfalls, I find it sad that the waterfall bears a name that describes neither the creek it is on, nor its shape or emotions. It does, however, describe its more general area, so I guess that will have to do.
So, like Smoko Falls, which lie on Mother Cummings Rivulet rather than on Smoko Creek, Compton Falls do not lie on Compton Creek, but on neighbouring Falls Rivulet. Obviously, they can’t be called Falls Falls, so they got called Compton. I wonder who this Compton was to have a hill, a creek (albeit a different one) and now a waterfall named after him. Google was no help. A friend thought Twin Falls would be a fitting name, but Compton has already been nomenclatured, so that is that.
Both small watercourses issue from Compton Hill above, although they flow in different directions, thanks to the mini watershed provided by Denison Ridge, which begins to take shape about half was down the hill. Whatever; Falls Rivulet is an utterly charming stream from any of its vantage points, but particularly from the area of this shapely twin waterfall.

Denison Ridge is where we parked the car, on a road that is not on my map, which dates back to the early 90s. Although the falls were pretty much due west of where we parked, the easiest line of travel was to proceed northish for a short while, and then slightly south of west, roughly on contour, until dropping very steeply to our goal. As there are many cliffs protecting the falls, this avoided them, and gave fairly easy access (if you count bushbashing through thick forest without a track “easy”). Don’t be fooled by my nonchalance: this is not an area for tourists or even average club people. It is for pretty serious and experienced bushwalkers.

Seen from afar, it was a glorious sight. Seen from up close, it was utterly magnificent. Its shape is positively alluring, with wonderful lines of flow and benches for the water to trip over on its way down.

This is another waterfall that I tried to photograph from the side, about midway up, hoping thereby to avoid the spray, but once more, the bush pulled me down until I found the vantage point used for the major images above. It was relatively spray free and the movement in the foreground created by the waterfall wind wasn’t too bad. I shot and was happy enough. Caedence and Rob went for a more front-on shot, but I enjoy foreground and a bit of context, (and I like to be different), so was happy with where I was. At first their path to their vantage point looked dangerous, but on closer examination, I was comfortable with it, as there were things to hold along the steep descent (forty five degrees) of mossy log to get across the creek. However, I didn’t want to fight spray, so stayed where I was.

Rob was making videos of himself sliding, and Caedence was shooting from many angles. I got cold, so started slowly back, knowing they would catch up with me eventually if I went slowly enough. They did, and we met up in the forest near to where our routes met the road. My gps had failed to record properly in either direction, but I remembered features of the bush – in particular, fungi we had met on the way out, so like Little Red Riding Hood with her crumbs in the forest, I followed the fungi and headed for the bit of route that I did have, and soon enough, heard the other two. It was nice to be able to loiter for a bit and admire the fungi. Moving like that kept me from freezing.

The next falls on our agenda were ones that Rob had worked out (he had worked out Compton as well). We parked and headed into the forest. The distance was not that great, but we walked and walked through endless cutting grass, being constantly pushed to the side of our goal. Unofficially (of course) I have in my mind christened these Ouch Falls, or maybe just Cutting Grass Falls. Yuk Falls would do. In the end we decided we had no great lust to see whatever was at the end of the cutting grass quest and gave up for better things to do.

I drove a long way around to the nearest parking spot to Lonnavale Falls. To reach them, however, we had to cross a small creek, but one which was in mini-flood right now. The other two got across without any problems, but I became very nervous about slipping in and doing over $7,000 worth of damage, by the time you count my full-frame camera, my expensive lens, my iPhone and my Samsung gps phone. I also have athletic goals at present, and didn’t want them jeopardised by slipping and breaking a bone. Whatever these falls were, I could come back another time, when I would be less likely to slip or fall in. I also didn’t dare take my dog who would have been clumsy and frightened crossing. If she slipped and fell in, she might be carried downstream to a small fall and drown. Thus I opted to go fungi hunting with her while the other two explored the falls. I really didn’t mind. The forest was wonderful, and Tess enjoyed being there with me.