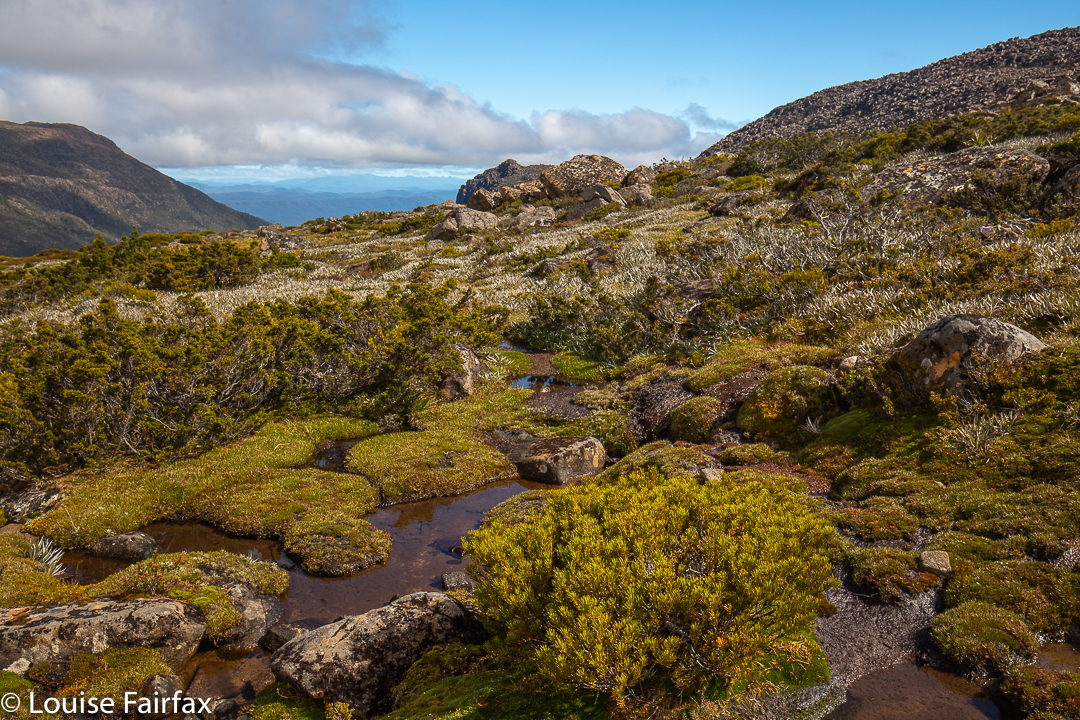 Having been rather effectively grounded by my broken wrist for two weeks now (which means I can’t handle a rucksack or tent), I was starting to get worried about losing long-haul type fitness, so I decided it would be good for me to undertake a long day, and visit Mt Field West, going over the Rodway Range, popping up Naturalist Peak whilst I was in the vicinity, and returning via the Newdegate Pass near the Watcher, and dropping down to Tarn Shelf to complete that circuit as well as doing the Big Fella. It looked nice and long on the map, but I didn’t know how long until my gps told me at the end. Using the rule that adds a km for every hundred vertical metres climbed, the route ended up being 32 km equivalents.

My dog was excessively jealous as she watched my preparations for leaving, so I had to begin the day by taking her for a walk (not counted in the overall tally, obviously). It isn’t fair to lock her up all day while I have fun without her. This meant that the carpark was nearly full when I arrived at Lake Dobson. Oh dear. “Everybody else” was already up enjoying the mist and clouds that were swirling around the lake, and I was only just setting out. I hoped there’d be some mist left up high for me if I hurried.

As I trod the path beside the lake, I couldn’t help but greet the plants by name as I passed, happy that these friends were on close enough terms with me that they did have names and were not at the “Hey you bush” level.  Many years ago I read a brilliant book by Anna Pavord, The Naming of Names, in which she points out that if you don’t know the names, you can’t differentiate, and you are just looking at bush or forest, an amorphous green mass, but once you know the names, individuality and the fascinating differences of each genus and its species become evident. A whole new world is opened to you. And naming, she argues, helps us feel less adrift in a world that can otherwise be hard to interpret or understand.

Ursula le Guin is a writer who looks at this in an interpersonal level: once we know someone’s name, we have a certain power over them (and vice versa). She depicts the power of naming in a wonderful fantasy: The Wizard of Earthsea. Teachers try to learn the names of their students as quickly as possible, partly for this reason.  Farmers don’t name the animals they intend to eat, as eating “Harriet” or “Daisy” is all but impossible. Naming connects the namer to the named. Maybe fewer deaths in war would take place if the enemy were personalised with names. The Nazis depersonalised the Jews by giving them numbers rather than using their names; it’s easier to gas a number.

I once rescued plants from death by being able to name them. I heard a machine bulldozing every plant in our beautiful laneway. I grabbed my baby and ran with her on my hip down the road to plant us in front of the destructive machine. They told me they were just bulldozing weeds. I said: “They’re native plants that we in this lane treasure; that’s Hardenbergia violacea; that, a Hibbertia stricta”, and on I went. “God”, they said, “she knows the names of the weeds”; eventually they agreed to negotiate with me and the residents who cared enough about the plants to know what they were. It was fortunate that they didn’t kill us, really; that baby has grown into a beautiful person who studied botany at university amongst other subjects and who adores plants of all kinds.

And so, thinking of Anna Pavord, Ursula le Guin and others who care about naming things (Theophrastus, 300BC, is another such, who intuited that the chaotic world of plants had an order to it, not just of function but also of structure, if only he could crack the code. He went a long way to developing the system of classification that Linnaeus eventually adopted two thousand years later), I worked my way up the hill, completing that relatively uninteresting section (I am not a fan of roads) in a much shorter time than when I have a full rucksack. Today I only had 5 kgs – enough to give me a little work, but not overburden me as I nurse this arm.

At last I was on the Tarn shelf track, smaller stuff, which one enjoys for about a quarter of an hour before peeling off and heading upwards to cross the rocky Rodway Range. That would test this one-handed, single-armed animal. I was clumsy and hesitant, but got there. The way down the other side to K-col was similar. I felt like a wooden toy. This trip was supposed to give me back a little confidence but, so far, it wasn’t happening.

Two hours after starting I was having my first break, a drink by Clemes tarn and a bite to eat. Another hour and I was on the summit of Mt Field West, which interested me far less than the beautiful basin just below full of alpine plants, so I chose to have lunch down there rather than on high with its smudgy views in midday glare. Now that my main mission was accomplished, I could relax and enjoy the alpine plants for a while. This area is magic.

I did have a time limit, as I had agreed to have dinner with the ex-baby referred to above, and to babysit her children in Hobart, so I couldn’t do what I wanted to, and just stay up there, lingering until sunset.  I did, however, have time to go home the long way.

By the time I was back in the vicinity of K-col, and quite eager to photograph flowers, the wind was strong enough to have all of them waving merrily in the breeze, and the glare was enormous. Hardly conducive to good photography, so on I pressed, rather disappointed, especially at all the exemplars of Craspedia alpina = C. macrocephalia that nodded their greeting as I came by, but which were far too mobile for me to be bothered with – and far too white at this hour, as well.

It was similar around the Newdegate Pass and over the other side. Once down on Tarn Shelf, out of the worst of the breeze and with the sun slightly lower, I began my search anew. I only found one at this altitude, right near the end of the shelf, which I stopped for. By now, I was actually rather tired, and had enormous trouble unbuckling my rucksack to extract my camera.

The rest of the trip was rather uneventful, as long as you don’t count meting a very pleasant Ranger right near the end; he was setting out to sleep on high so as to photograph the dawn next day, and, despite my dinner-in-Hobart deadline, we chatted for what felt like fifteen minutes. Anyway, surely I needed a break before undertaking that driving!