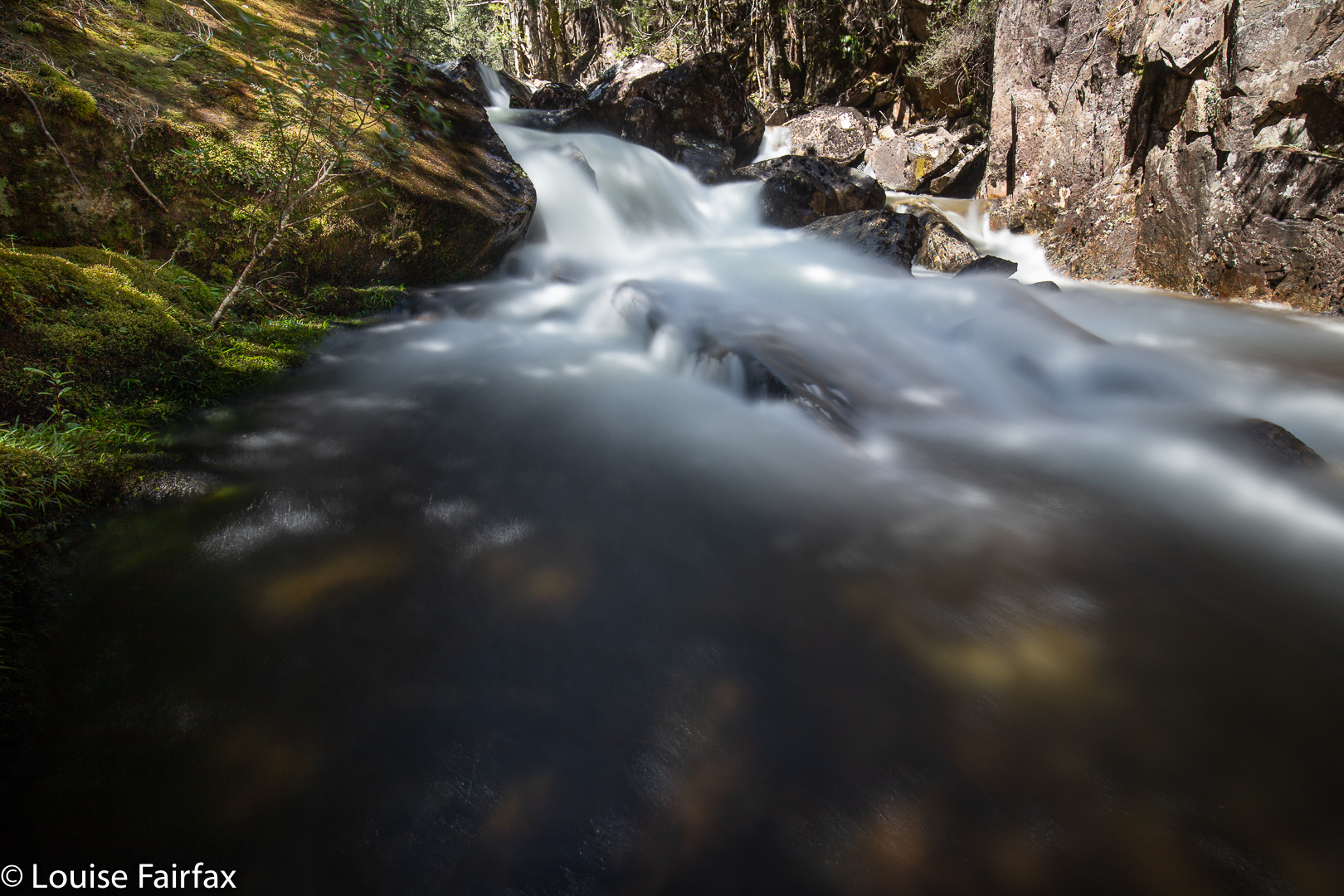 Meribah Falls pose a challenge to their would-be visitors at many levels. In terms of beauty, the entire area is a literal, mossy “walk in the park”; however, in terms of the usual usage of that phrase, it is no parky walk, for not only does one have to navigate one’s own way for most of the journey, but one has to traverse fairly challenging terrain, which is very steep in the final sections.
If you have the bush skills to reach the falls, you are then faced with other challenges:
(i) Given the 2+ hour car trip (if you come from Launceston) and the roughly 2 hour walk from the car, you will probably arrive in the middle of the day, when the sun is at its glariest, and the dynamic range, a curse. This can be the case even if you leave in gentle rain, as we did. By the time we arrived, the sky was blue and the sun was shining brightly. It was a glorious day if you didn’t want to photograph waterfalls.

(ii) The Upper Falls pose a massive access problem due to the severity of the terrain, and the cunning ability of trees to grow out of tiny cracks in a cliff, which means they obscure your view. A good angle is an insurmountable problem unless you have wings.
(iii) So, you say, you’ll resort to words … but how does one describe this beauty, so tantalising, so full of gurgling cascades set in a context of lush moss and lichen? How do you accurately convey the sense of peace and of time standing still? Is it enough to say you just forgot who and where you were, so much had you just become part of the environment in this place that embraced all? Words, being finite, when trying to deal with an experience that transcends finitude, are hopelessly inadequate.
(iv) And the final problem: how on earth do you discipline yourself to leave? That required a massive yank of the will.

Anyway, at the outset, these difficulties had not presented themselves. I had just had a really tough bushbash two days previous and was not seeking any hint of physical hardship today; I remembered the spur that needed to be crossed on my way to Horeb with displeasure (storms had toppled a nasty pile of trees, making for an obstacle course, and, worse still, letting light into the area so that opportunistic weeds had filled the gap), and so thought I might try a higher tack. A friend, Stephen, was with me today, and he was happy to let me have the lead in our route choice.
We crossed Jacksons Creek (14 mins) and then the next creek (another 15), and followed the track out of that, steeply up the hill until the climb was all but finished, after which we headed across an open area of vague, broad spur to drop to a truly delightful stream at the edge of the forest. We could see Premier Peak, and I pointed out that it was in a direct line with Horeb Falls, so set my compass to the peak, as I knew she would not be visible once we entered the forest.

I waymarked the point at which we crossed the stream, as I loved it so much I wanted to return to it on our way back. We had a brief drink and bite there, as I also thought there would be no water before Horeb Falls, and maybe we’d get thirsty. Off we set on compass into the deep dark, luscious forest. What a marvellous place. Up we climbed, delighting in the scenery until we had gained the same height as Horeb, and then contoured around the slope. Being this high this time, we avoided the storm damage of my previous visit. Any time I saw a wattle ahead, I veered uphill away from it, as I knew it sniffed of light and new growth that I didn’t want. Forty six minutes after leaving the second creek, we were above Horeb Falls. (∑ 1 hr 16 so far).
From Horeb to Meribah, the route is taped, but that does not mean you can pop your brain in your back pocket, as you need to follow the logic of the route if you’re going to continue to see tapes. Sometimes we had to correct ourselves, but they did go the whole way if you used your tracking sense. This section is very, very steep, with massive and dangerous drop-offs down to the river. The tapes serve a safety function if nothing else!

I was very pleased to arrive at Meribah, as I had worked up an appetite by then. (That section took 40 minutes.) I kept saying how starving I was, but I knew perfectly well that the second I arrived, my camera would have priority over my hunger. And it did. I took a few shots, noted that it was a bit too early for official lunchtime, and ate anyway. After all, I had had a very early breakfast.
We decided to go to cascades we knew were above the main falls first, and then work our way backwards. There was an unbelievable amount of beauty to try to capture, as well as lunch parts one and two to eat. We ate, photographed, just sat and enjoyed, and worked our way down the stream, past cascades and falls until we reached a fall dubbed by Stephen Tumultuous Cascades. The water was too glary; shadows posed a problem, as did trees …. as did the rather treacherous slopes, so often quite a bit of time was taken just getting into position. It was unbelievably helpful having Stephen there, as I could climb to spots and then get handed my tripod instead of having to clumsily climb one-handed. It was too dangerous for that.

I think we arrived at the top cascades at about 11.50. All of a sudden Stephen was telling me that it was 2.30 and maybe we should actually set out for home now. Unbelievable!!! Where did all that time go?? How did that happen? I was / we were so very lost in the moment that over two and a half hours had just been gobbled up unnoticed. Off we set.
On the way back, Stephen steered from behind, letting me know if my homeward route was diverging from our outward one to keep us in line seeing’s the outbound route had been so pleasant and untroubled. We stopped for a drink and snack at the waymarked creek crossing, and were soon enough relaxing, just walking on the track that felt like a super-highway after being in pristine untouched wilderness up until then. Meribah is one of my very favourite waterfalls, even though its shape is unprepossessing, and I have no wonderful photos; today, one of my very favourite waterfall-bagging days. I can go back for better photos in cloudy weather some other day. It was great to see it all on a glorious day like today; so lovely to be in untracked wilderness but not have to bash my body up to bits. My soul sang all the way home.

For the photos of the falls and cascades further downstream, see my blog on Horeb Falls: http://www.natureloverswalks.com/horeb-falls/