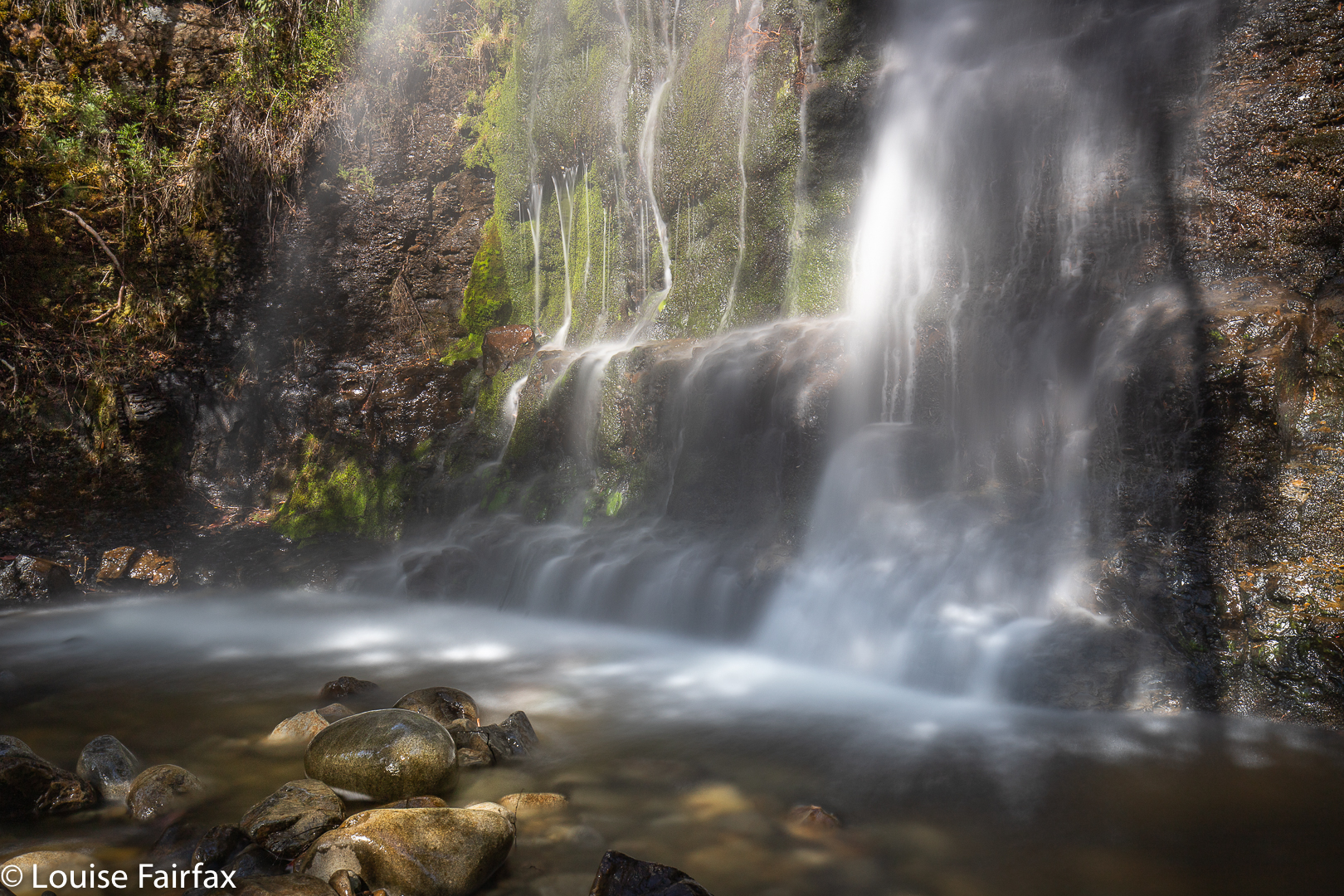 The last time I visited Old House Creek, I approached from the base, and found the driving part to be more than nerve wracking.* So, this time, wanting a revisit to take in the extra falls I’d been alerted to by a few friends, I tried coming in from the top, via good old Maggs Spur 17. Great decision. I used it until it crossed Old House Creek, and then parked, electing not to attempt to drive down the road that descends on the southern side of the creek. Second smart move of the day. Going well so far.

I wasn’t sure how high up all these extra falls extended, so popped into the forest every now and then on my way down to check out how things were (using the road. Oh BOY was I glad I hadn’t tried to drive it!!!!). The road was ugly, but the forest was gorgeous and mossy, and nice and open; the creek on each visit was just merrily cascading – quite noisily – and although each cascade would make a lovely image if one spent time, I was there on this day for actual waterfalls, so continued purposefully at this stage.

Once I had crossed the first road perpendicular to my line, the waterfall fun began. I waymarked each one on my map, but it became ridiculous. In a very short space of time, I had ten waterfalls, so all the yellow circles were just on top of each other, and I will delete the lot. I made my way to the base, taking just a few record shots in case I needed them for reference. I was at the base 35 minutes from leaving the car, so this was not a massive time commitment thus far. Ha ha. All up, spread over 4.5 hours, I did 1.5 hours’ exercise (which included some extra exploration higher up) and 3 hours’ photography!

The forecast had been for a cloudy day, but I had noticed to my chagrin that the sun was making an increased showing as I descended. By the time I got to the base, it was really spoiling the party. I took some shots ’cause I was there, but I was not impressed with my own or the sun’s efforts. I will probably ditch the lot. (I did). Anyway, I already had some reasonable photos of the base, even though the flow was better today.

OK. Now the fun began. My first task was to try to get a decent shot of “Falls 2” or maybe you would call it “Upper Tier”. Given that there were to be ten, I thought numbering was easier. Up I climbed, and got to a spot from where I thought I could work my way across. Hm. The drop was not infinite, but it was substantial and vertical, and if I slipped and fell, a broken back or neck or a smashed head could easily result. No one knew I was there to even come and collect the pieces afterwards, and if I was only half dead, that would be inconvenient. Half would become full before they found me. I did have my plb, but if you are severely maimed or unconscious, the button is rather hard to access and press. (Btw, Falls 2 extends upwards into infinity. It looks middle sized from the base of Falls 1, but it goes out of sight, and you only get the full extent of its measure if you climb up and up to its top.)

So, under the threat of exacting penalties I tested and retested every foothold and hand hold, choosing a path that never once abandoned a secure anchor. It took 30 minutes to reach the base from the other base below! No doubt you could do it faster by being less neurotically cautious, but in doing so, you would also no doubt disturb a great deal of moss, so in the interests of the environment, even if not of your body, I plead with you to take this very gently if you are as silly as I am and want to get there. I will also add that it is really not worth it. The view from down there was not extraordinary, and there was a lot of spray from the proximity to the landing. I am not pleased with the booty I obtained, and will not be using the shots for any competitions of beautiful photos.

I had an overdose of adrenalin by the time I got back to my route after Falls 2, so just nodded a courteous “Hello” to Falls 3, which were sweet, but utterly dwarfed by the monstrous Falls 2 which seemed to go on forever. However, Falls 4 and 5 – a kind of a double – well, I couldn’t just ignore these, and thus began the very tedious business of setting up for almost every single waterfall I found. (Setting up my equipment and then packing it back at the end takes about fifteen minutes each stop: unfolding tripod, screwing on filter holder, unpacking glass etc.  I don’t dare walk with exposed glass when bushbashing.)
I think these were my favourites, although competition is fierce.

Later on I was also to skip Falls 9 (photographically speaking), just because the sun really did spoil them, and because I was soooo over unpacking and repacking my gear every few meters. Similarly I saved Falls 11, higher up, for a different visit, not because they were not beautiful, but enough was enough. I was satiated by this stage. Falls 12 I suspected to be the last, so gave them what I hoped was my final photographic attention, and called it quits for the day. I was starving. Time to patronise my favourite Mole Creek cafe (Earthwater), where I can sit in their beautiful garden under a tree, far away from corona-infected people, and enjoy bird calls and filtered sunlight while waiting for my food.

* For my previous blog, entering from the base, see
http://www.natureloverswalks.com/old-house-falls/