Dawn, summit day
Angela had three days clear (as did I); we decided Mt Proteus was a suitable mountain for this time of year and that time span. We knew Maureen needed Proteus on her way to completing all the Abels, so invited her too, and an expedition (albeit a little one) was born. Off we set excitedly on the Arm River track, heading west, and then the Overland Track heading north until our camping spot, just north of Pelion West (Pine Forest Moor). What lay in store for us? For the moment, light drizzle and not much of a view. Happy to have the day completed so we could get cozy in our tents, we filled up with water from the idyllic creek below, so lush you almost needed sunglasses to cut the vibrance, and retreated to our colourful homes among the pencil pines (Athrotaxis cypressoides – which grows between 700 and 1300 ms asl and has nothing to do with the pine family at all [or with pencils]. Homesick early settlers called anything evergreen “pine”). It was protected enough there under cover for us to have a relatively leisurely setting up process, and to spend a little time carefully choosing our piece of real estate for the night. You should have heard me gasp with delight when I emerged into the open on the morning of the second (summit) day and saw the expanse of white depicted in the two photos above. I was thrilled with the freshness and delicacy of it all. This is the terrain we had to cross for many kilometres to meet our mountain. We found it tiring, as we had to lift our legs very high to get over that grass, sometimes unexpectedly falling in holes – often filled with water – hardly a welcome outcome on a morning such as this. We had had to don wet socks and boots at the start of the day, so accidental soakings were not quite as disastrous as might be imagined, but our toes were numb and frozen nonetheless. There were also two bands of pretty dense bauera bush, but they didn’t last very long, being narrow, and just as I was starting to wonder if it was going to be a fight the whole way, the vegetation became calf high, and we had easy access to the summit, now not far away. Angela (L) and Maureen (R) at the summit cairn. Maureen looks very happy to only have ten Abels left to go.

It had taken 2 hours 38 to reach the summit. The book had said two; I had feared three, so this was a pretty good compromise. I had allowed for a possible ten-hour day when I asked the others if they minded starting at 7.30, so maybe we had won a little time. Off we set on our return journey. Once we knew which type of undergrowth in this area fared better (scoparia scattered amongst fern grass was faster than button grass, which we managed to mostly avoid on the rebound), we were able to cut a bit off our time, and after a tidy 2 hrs 7 mins we were back at our wonderful fairyland campsite, ready to relax with a cuppa before packing up our tents and moving on. 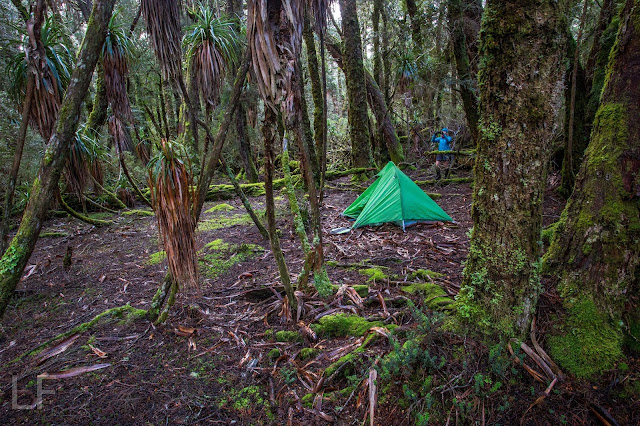 Angela photographing Ents at our campsite.

We squandered a little of our won time by being a tiny bit slow at packing up (I’d allowed an hour), and we were not ready to set out before 3.15. Maths said it would probably be dark by the time we reached Pelion Hut. Maths was unfortunately right, but we knew this was likely. I wanted a tiny break for a drink at Pelion Creek, and another for photography at Frog Flats. I also couldn’t resist a set of photos as we rounded a corner and saw Pelion West in the clear afternoon light. Cathedral mountain also looked a treat. These things take time …. Angela had predicted that we’d be able to do without head torches until 5.45 and she was right to the exact minute. By this stage it was becoming downright dangerous, as the boardwalk has steps that you couldn’t see in the dark, and falling would have been treacherous. Also, many of the boards lacked chicken-wire, and the ice of the morning had lingered on boards and leaves the whole day, turning the Overland Track into an elongated skating rink. The final twenty minutes were done by torchlight. I was hoping for another lovely frosted morning next day, but thick mist regaled us in our waking moments. At least it meant I didn’t hold the others up with too much photography. Off we set into the mist, hands burning with the cold, hoping that the climb to the high point on this track would warm us up. The high point on the Arm River track, and the sun breaks through We had only been going one and a half hours, but I was starving. Besides, some photos were in order!!! Don’t be put off by Angela’s shorts. It’s FREEZING. Mt Pillinger bursting into the blue realm above. A different tarn on the way home. I didn’t say I took NO photos – just not as many as I might have done.
It was all downhill from there, and thus ends another perfect little expedition. Mt Proteus is a wonderful mountain to have in my collection, and already the happy memories of our time there circle and recircle in my contended mind as I relive moments of beauty and wonder.