The bus neared the grand old Hotel Lago di Braies, the start of the AV1, the place I had been looking forward to sharing with my husband since the first time I stayed there two years ago. That first time, I had been full of uncertainties. This time, I knew what lay ahead and was sharing it with Bruce, hoping he would enjoy it. It is sometimes scary returning to a place once loved: I get fearful that the present actuality won’t match my fond memories; that it will fail me the second time around and somehow, in that failure, mar the aura created by the initial memories as well. I thus had a mixture of apprehension and excitement as we grabbed our packs and headed for the entrance. If nothing else, here was the last time for a while that we would have a room for just the two of us, and the final decent shower for an unknown number of days to come. In order to fully appreciate what the hotel had to offer, we chose a room with a balcony overlooking the lake with its reflecting waters of an entrancing colour – its quaint wooden boat shed protruding over the bobbing wooden dinghies to our left – the gardens in front, and the tiny chapel to our right. The scene needed some ladies and gents in Romantic Era clothing. We spent a long time both before and after nightfall just staring at this view.

Day 1. The next morning, it was time to test out this route, 2015 edition. It begins with a big climb, up into the mountains at the end of the lake. As with last time I did it, there were plenty of people on the track, all heading in the same direction (both day walkers and AV1ers), so I was free to go at my own “happy pace”, lost in my own little world of thought. Bruce and the girl who was with us were perfectly capable of finding the route without me, and I am used to climbing solo in the Alps. It’s our habit to reunite at the top. It was a hot day – a perfect day for using the climb as a good workout and climbing quickly to finish it before the day got any worse. I used my early arrival to debate our case for a bed in the full hut. We were given our own quarters in a little barn, removed a bit from the hut – perfect. There was no toilet or shower, but we’re used to tenting; this was luxury. I loved the view, and we kept the door open to maximise it. (Day 1, close). Looking at the real hut from our little barn

The day was a hazy sort of day that wasn’t going to offer any fine vistas from the top of Seekofel, but I hadn’t done enough work for the day, so climbed it anyway just for the workout value. I didn’t take any photos, so could have saved myself the weight of my camera. Even in the haze, the view down to 1400 ms below, to the diminished lake and hotel where we had been that morning, was impressive.

Day 2. I had intended us to stay at Rifugio Fanes, but when a call was put through on our behalf, they said it was full, so we went to Lavarelle instead, and it turned out to be nicer anyway. The food was brilliant, there was a beautiful lake for Bruce to swim in once he’d arrived, and a plethora of wonderful streams to explore once the day had lost its sting. This day was another scorcher, so I’m afraid I belted it out like the previous day, getting my homework done before lunchtime so I could enjoy relaxing at the hut and dipping my legs in the lake. (The water was too cold for me to swim. Shrieks from a different beach indicated that others shared my opinion. Even Bruce didn’t last very long in the tempting waters). The odd combination of solo and company that resulted from our different speeds pleased me, as without the other two, I got to converse with new friends in German before I was required to use English once more. I also got some reading done, satisfying my love of reading in mountain locations. (Day 2). Bruce having an enjoyable freeze down at the end of a scorching climb; Lavarelle. One of the many streams to explore near Rifugio Lavarelle (end day 2).

Day 3 was a longer day, culminating in a protracted climb up to the highly perched Rifugio Lagazuoi, a fabulously situated refuge. The first section is benign enough, involving green vistas and flowers, followed by a medium-length climb to a different col, a short, very steep descent over the other side, a traverse along a scree slope with huge towering, shapely rocky hunks above, and finally, just when the day has reached its hottest, the long climb to the rifugio. Once more, with the day that hot and with there being too much glare for photos, I just knocked it off quickly so as to enjoy being there. For the third day in a row, no photos were taken after about 9 a.m.. I like walking quickly in the Alps anyway, and when it’s hot, I love relaxing at our destination and soaking in the view, waiting for day-trippers to disappear and for the sun to assume its more golden hues as the shadows lengthen. Sunset at this height is always an event to look forward to. Trying to cool down at a stream early in the day on day 3.

Day 4 involved, of necessity when you’ve just spent the night very high indeed, a marked drop to the valley floor way, way below. There happens to be a téléphérique operating from near this hut, so I suggested that Bruce, who has never been a purist when doing these walks, take the easy way down, which would save his knees and give him a rest. He liked that idea, and went down with a family we had befriended. They would all walk up to the next hut where we would be together once more. Yet again, it was an extremely hot day, and one that didn’t offer much photographically due to the glare and slight heat haze. I repeated the no-fuss, no-delay approach of the other days. I also knew that our next rifugio, Avarau, had the best food of any mountain hut I know. I was keen to have both lunch and dinner there to maximise the quantity of food sampled from this great chef. His liqueur cakes are very special, but his pasta is out of this world. We had cakes, then lunch, then divine pannacottas and the best dinner of the holiday. In between all that eating, if I was still capable of getting up any slopes, I had planned to climb the mountain from which the refuge gets its name. However, at long last all these days of extreme heat produced a hefty storm, and no climbing could be done, so we ate some more. I didn’t even get to explore the interesting rocky formations below, of the cinque torri; the storm beat me to it. Dawn, day 5. The cloud lingered, to float around the biggest of the Torri. I loved it.

Day 5. Time was running out on our Italian section of the trip and we would soon be flying to Manchester. The person with us really wanted to see the Drei Zinnen (tre cime), so we had agreed to terminate AV1 on this day and begin a different trek further east that would take us to these shapely and dramatic monsters. We dropped down from the refuge, exploring the five chimneys en passant, descending through a beautiful, shady forest replete with wildflowers, and dropping eventually to the road, where we caught a bus to Cortina and another further north to a point I had selected that would enable us to reach our new goal if we walked east and climbed a huge amount for a few hours. Flowers on the descent from Avarau
After the cosy, friendly huts of the AV1, this one, on the AV6, felt very touristy and strange, but it satisfied a need for us (and the many others who want to see these rocks at sunset), and we were given a bed in another barn, which felt much nearer to our style than the main hut. Another storm was brewing. We could barely see our barn through the thick mist, which helped lend the place some of the atmosphere that it otherwise lacked for us. The paparazzi came out in force both nights we were there. It was almost comical. Our barn (shared with many) and moody skies over the Paternkofel – far more atmospheric than the giant hut efficiently churning out meals for the hordes. (Day 5, close) Day 6. This day, which we had left free for exploring, was brilliant. Whilst taking sunrise photos, Bruce and I happened on some tunnels that delighted us. We explored them, and decided we wanted to devote more time to this after breakfast. Off we set, not having a clue what lay ahead or how far we’d manage to get. Bruce got quite high, but called it a day when the drop-offs became a bit daring. I was a little unnerved, especially as everyone other than our party had the full via ferrata gear (helmets, karabiners, special rope) but D was also willing to keep going, so up we went. When we got to the final stage of the climb up Paternkofel we decided we needed to be clipped in, so climbed the neighbouring knob that was less dangerous instead. Even this was high, with an element of risk, so we were both elated as we stood on the summit. It was exhilarating. On our summit
In the afternoon we climbed a different tower of smaller dimensions, and Bruce was able to climb that one with us. We used our day well, and I also did a kind of circuit around some other mountains. We all explored the lake below us. There is plenty to do in this area, and I want to return with hired ferrata equipment and do a whole lot more next time. The Drei Zinnen used to be the Italian-Austrian border (it is still the linguistic border), and has a great deal of historical interest (as did the Cinque Torri and the area around Rifugio Lagazuoi). It is shocking and amazing to look at a scene so spectacularly beautiful and try to imagine soldiers fighting for their lives in the same spot. My daughter and I explored some of the soldiers’ tunnels when we were here in another life to race up the paths. Day 7. Exit. Always sad, but I like to leave an area wanting to do more. We had beautiful weather for our departure, and waved a reluctant goodbye to the three chimneys. For me, this was one of many goodbyes to these rocks, as I used to race in this area. They are old friends with many happy memories attached. I’ll be back. The object of our quest: die drew Zinnen or Tre Cime. 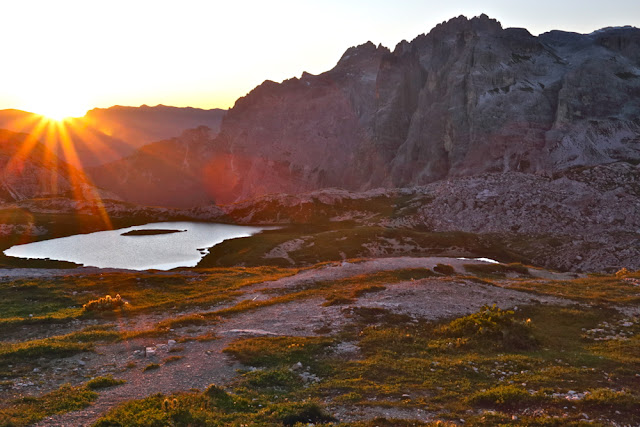 Dawn from the hut